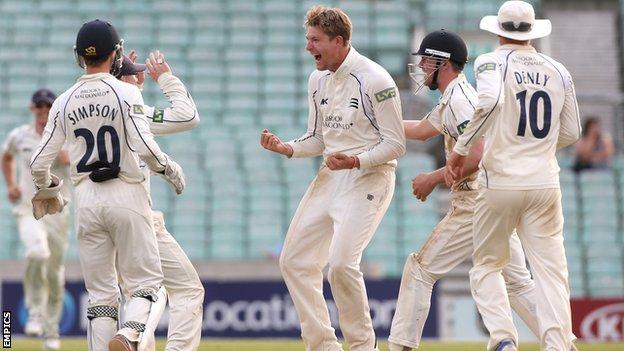 Off-spinner Ollie Rayner produced the best match figures of the summer of 15-118 as Middlesex completed a 146-run win against struggling Surrey.

The visitors set Surrey a target of 385 to win after declaring on 235-9, Dawid Malan top-scoring with 50.

Rayner took 8-46 in the first innings and was soon among the wickets again before Hashim Amla held Middlesex up.

The South African was eventually caught for 84 off Rayner, who claimed 7-72, as they were all out for 238.

2013 Championship bowling records in a match

The result leaves second-from-bottom Surrey in a bleak position, realistically needing a positive result from their three games left to avoid relegation, starting with next week's clash against fellow strugglers Somerset.

However, Rayner got the seventh-best match return by a Middlesex bowler ever on a pitch which appeared to suit spinners, as Surrey's Gary Keedy took a second-innings total of 6-106 to keep his side's slender hopes of the Division One title alive.

They now sit third, 28.5 points behind leaders Durham and 14 behind second-placed Yorkshire, but have played a game more than their rivals.

After Middlesex's declaration, Surrey found it difficult to build up any real partnerships, with Amla being their most potent force.

But once he was caught by Chris Rogers off the effervescent Rayner, Middlesex cruised to victory, as Surrey's last four wickets falling for just 31 runs, with Jade Dernbach the last man to fall to the German-born 6ft 5in spinner.

"I'm absolutely ecstatic, it's been an amazing match for myself but I think the batsmen have stepped up as well.

"We put them under a lot of scoreboard pressure on a pitch that was hard work. We hadn't batted awfully well of late and I think that's a great team effort.

"There was a lot of pressure (on me) after the first eight but the pitch has really helped me a lot.

"What has set me apart is my height and luckily I found that bounce, which made me a lot harder to play ultimately."