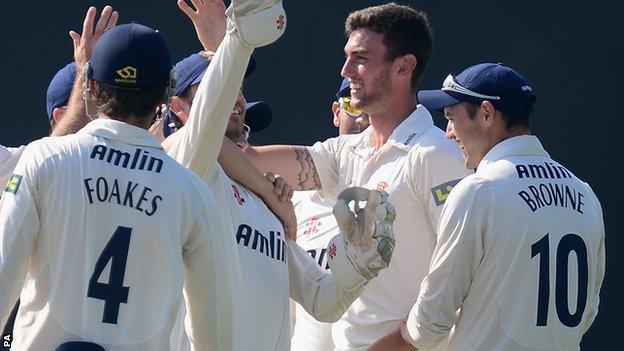 Essex paceman Reece Topley claimed a career-best match haul of 11-85 to help finish off Worcestershire with a day and a half to spare at Chelmsford.

Resuming on 163-3, still needing 86 to avoid an innings defeat, the visitors at least avoided that fate thanks to a seventh-wicket stand of 67 between Ross Whiteley (38) and Shaaiq Choudhry (34).

But Topley took five of the day's seven wickets as the visitors totalled 299.

Essex then suffered two hiccups as they made 53-2 to win by eight wickets.

The home side's 23 points from the contest keeps Essex's hopes of sneaking second place ahead of Northants very much alive.

Essex have a game in hand on Northants, who do not play next week, and if Northants fail to beat Hampshire at Southampton in their current game it would make things even tighter.

Topley's 5-65 followed his career-best first-innings haul of 6-29, the main morning damage being done when four wickets went down in 10 overs.

Topley got three of them to some injudicious shots, while Ryan ten Doeschate nipped in to end opener Matt Pardoe's resistance for 88.

Whiteley and Choudhry then got together to ensure that the day's play would go into the second session.

There was a minor wobble for Essex when England spinner Monty Panesar was removed from the attack following heated words with Whiteley, at which point umpire Peter Willey intervened, also bringing captain James Foster in to the conversation.

But David Masters had Choudhry caught behind with the last ball before lunch and Topley then removed Whiteley the same way straight after the resumption.

And it was also Topley who gave wicketkeeper Foster a fourth catch of the innings when he ended a lusty 29-run last-wicket stand between Jack Shantry and Alan Richardson.

Defeat, always on the cards after winning the toss and being bowled out for just 102 on the first day, ended any outside hopes Worcestershire might have had of going back up.

"There were little pockets of resistance and, hopefully, those guys will kick on from that but, all in all, there were not a lot of positives to take back from Chelmsford.

"It's been a bad match for us. We could make changes for the Hampshire game next week."