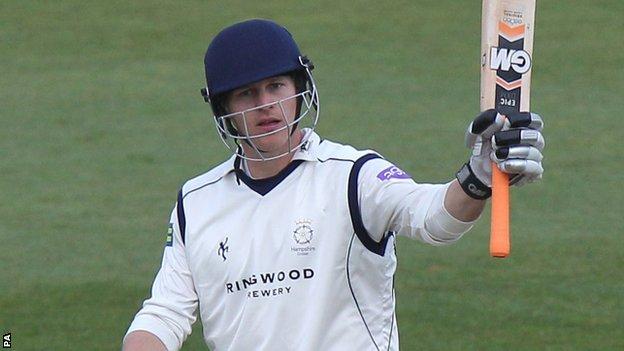 Hampshire skipper Jimmy Adams emulated Rob Keogh's double century earlier in the game as Northants endured a day of toil in the field at Southampton.

Adams passed 200 for the second time this summer with a six off James Middlebrook as the home side reached 515-9, a lead of 77, at the close.

He also hit 35 fours before falling to Matt Spriegel for 218 late in the day.

With a draw now certain barring a surprise turn of events on the final day, the pressure will intensify on second-placed Northants as Essex, the team immediately below them, closed the points gap by wrapping up an innings victory over Leicestershire.

Their attack was generally tidy, but received little assistance from the pitch and they gave away 56 runs in extras and five penalty runs when wicketkeeper threw a glove at the ball and hit it.

After Hampshire added 105 runs during the morning for the loss of McKenzie, who was bowled by Azharullah, Steven Crook and Trent Copeland accounted for Sean Ervine (22) and Adam Wheater (19) after lunch, but Adams and Bates were together for 41 overs to see their side into the lead.

Bates was eventually caught by Copeland at point, cutting at a ball from Azharullah, prompting a brief flurry of wickets that saw Matt Coles and Adams, who batted for nine and a half hours and fell one run short of equalling his best score of the summer, departing.

Play came to an end when Ruel Brathwaite gave a return catch to off-spinner James Middlebrook.