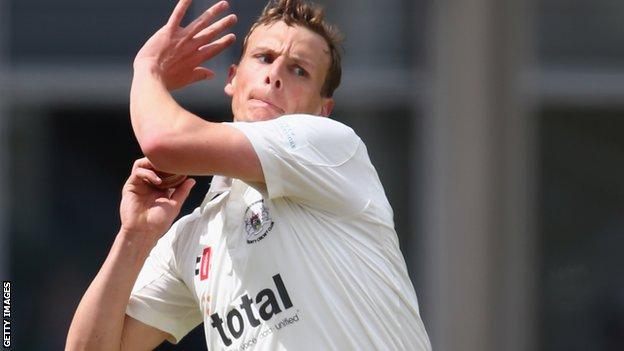 Will Gidman (4-28), who achieved career-best and batting figures in the game, took his match tally to 10 wickets for the first time.

The visitors began the day 339 runs shy of making the home side bat again.

Ned Eckersley (84) provided some resistance, but Leicestershire stumbled from 143-1 to 261 all out.

Gidman's 143 with the bat and 10 wickets with the ball represented the first time a Gloucestershire player scored a century and took 10 wickets in a match for 36 years.

The 28-year-old wrapped up Leicestershire's second innings when he clean bowled Ollie Freckingham for 30.

The maximum-point victory sees the hosts close the gap on the second automatic promotion place.

With second-placed Northants looking, at best, to be getting a draw against Hampshire, Gloucestershire look set to be no more than 32 points behind with two games to go.

But it was another match to forget for Leicestershire, who have now suffered innings defeats in four of their last five Championship outings.

"It was the first time since Mike Proctor in 1977 that a Gloucestershire player had taken 10 wickets and scored a century in a match.

"Will Gidman's delight as he bowled Freckingham to seal the match for the hosts was justified, as the all-rounder beat his career best with bat and ball, while returning match figures of 10-43.

"It was a tremendous all-round performance from Gloucestershire, but their supporters can be slightly frustrated that the team did not show such all-round consistency in the previous couple of games."