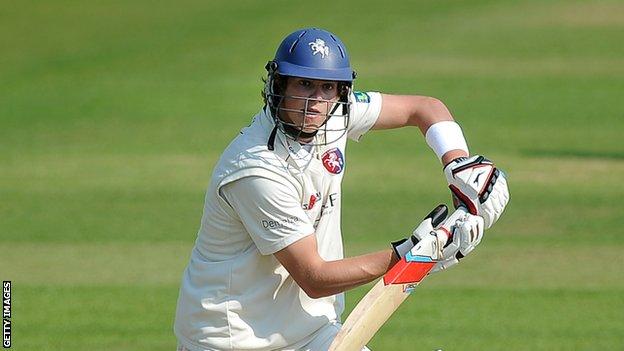 Sam Northeast led the way with 88 as Kent beat Glamorgan by seven wickets at Cardiff for only their second County Championship win this summer.

The hosts could only add 21 to their overnight score and were all out for 258, leaving Kent a target of 242.

Northeast, who recently signed a new contract, had a century in his sights when he became Dean Cosker's 500th first-class victim for Glamorgan.

Brendan Nash then saw the visitors home on 242-3 with an unbeaten 70.

Kent's only previous Championship win of the summer came against Gloucestershire in July.

However, they showed no sign of succumbing to nerves in their run-chase as Michael Hogan, the spearhead of Glamorgan's attack, had a rare wicket-less day.

Northeast's innings was the highest of a low scoring match and a good way to celebrate extending his stay with his home county, but was six short of his season's best when Cosker bowled him, having previously had Daniel Bell-Drummond caught behind..

With Northeast gone, Nash was in no mood to hang about and struck 10 boundaries in his 77-ball knock to finish the job.

"Based on this performance, it seems surprising that this was only Kent's second championship win of the summer.

"Everyone contributed, the bowlers took 20 wickets and the batsmen, through sheer patience and application, scored runs.

"After the trials and tribulations thrown up by a seamer-friendly pitch on the first two days, Kent took advantage when it flattened out on day three, and ran out winners at a canter, with skipper Geraint Jones declaring afterwards that just about everything had gone to plan during the game."