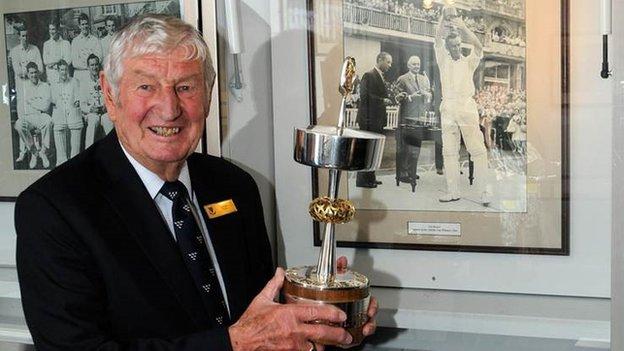 When the first ball is bowled between Glamorgan and Nottinghamshire in Saturday's YB40 showdown, it will be a far cry from the very first Lord's final 50 years ago.

Back in September 1963, when Sussex played Worcestershire in the first Gillette Cup final, Harold MacMillan was Prime Minister, The Beatles were poised to top the charts with 'She Loves You' and a gallon of petrol cost half a crown, the same price as a pint and a packet of cigarettes, 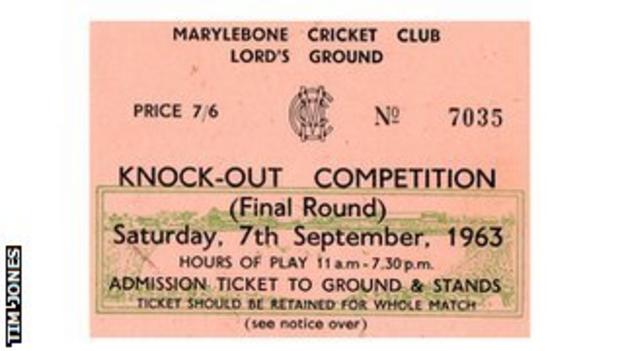 Meanwhile, the nation's police were busy hunting for the Great Train robbers (except for Ronnie Biggs, who had been arrested the previous day) and Bill Shankly's Liverpool were still eight months away from winning their first league title.

Much has changed since, and the game of cricket is very different to that played half a century ago.

Ask both winning wicketkeeper Jim Parks and Worcestershire spinner Norman Gifford where the biggest changes have come since Sussex's narrow 14-run victory at Lord's that day and, to a man, they both say out in the middle.

"The game as they play it is totally different to how it was then," Parks, now 82, told BBC Sport. "I still enjoy watching it though."

Gifford, 73, added: "There are things people don't like about cricket now. But the main thing is that, especially at international level, it still fills grounds and that's got to be good for the game."

Nevertheless, as can be judged from the wonderful stories told when Gifford was invited to join the seven Sussex survivors from that day in attending a 50th anniversary lunch in Hove last week, it does not stop either of the two former England players wistfully remembering the good old days.

When the two captains, Sussex's Ted Dexter and Worcestershire's Don Kenyon, trotted down the pavilion steps to toss up in September 1963, they did so wearing blazers, with their whites underneath, to decide who should take first use of a pitch for a 65-over contest, to be played out between the scheduled hours of 1100-1930.

This Saturday's final, only 40 overs per side, will be an hour and three-quarters - and 50 overs - shorter, which says a lot about modern-day over rates.

It only took a year before Gillette Cup cricket was whittled down to 60-a-side, the Benson & Hedges Cup then began its 30-year life in 1972 as a 55-over contest and, in 1999, the main Lord's final became a 50-over competition, to be brought in line with one-day internationals.

Next summer it all goes full circle again when the 40-over competition reverts to 50 overs.

In 1963, Worcestershire's Jack Flavell bowled the first ball of the day to Sussex opener Richard Langridge, numbers 11 and one on the scorecard.

There were no coloured kits, no fielding circles, no powerplays, no loud music when a wicket fell and, given that marketing departments were still a thing of the future, neither team felt the need to tag any suffix to their name like Sharks, Royals, Dragons or Outlaws.

Most professional cricketers played from May to September, then spent the winter months plying a different trade, from selling insurance to paraffin or even, as in the case of one former Sussex player, Christmas trees.

Sussex played at Hove, not the BrightonandHoveJobs.com County Ground, while this year's finalists Glamorgan had not, by then even begun playing at Sophia Gardens, Cardiff, let alone renamed it.

But, as both Gifford and Parks insist, what has changed most is the way they play the game.

"For us, that day at Lord's was only the fourth game of one-day cricket the county had ever played," recalls Parks. "But there has always been league cricket. And we were just lucky that we had a captain in Ted Dexter who had worked out how to play it.

"We'd done our homework. I was vice captain and we had sat down and worked out what we were going to do.

"When we played Kent at Tunbridge Wells in the first round, Colin Cowdrey was their captain.

"He kept in two slips all the way through and we piled up over 300.

"When they batted, Ted had players scattered all over the field, we won by 72 runs and we received an official letter from Kent, saying how disgusted they were with our tactics and that it was not in the spirit of cricket."

Cricket's first recorded 'Disgusted of Tunbridge Wells' or not, it would be two years before the rest cottoned on as Sussex went on to win both the first two one-day finals, following their victory over Worcestershire, by doing the same to Warwickshire a year later, in 1964.

While Parks was the top scorer in the match that day at Lord's in 1963 with 57, the man of the match award, rarely for someone on the losing team, actually went to Gifford, who took 4-33 in his 15 overs.

But Gifford generously maintains that they picked the wrong man.

"They should have given it to Jim," he said. "It was a sticky wicket, as they only had one cover for the wicket and rain had got underneath, and he batted magnificently.

"He was perfect for one-day cricket. He was a player who was never afraid to hit over the top."

Recalled Parks: "I did like to lift the ball. I remember once playing Yorkshire and putting Tony Nicholson four times over the square cover boundary for six.

"But we had to bat properly that day at Lord's. We were bowled out for 168 in the 61st over and you'd have thought that might not have been enough.

"But Ted came up with another inspired idea. Having seen what Giffy had done, he put on Alan Oakman, who was only then an occasional off spinner, who had not previously bowled in the competition. he took 1-17 in 13 overs, including the key wicket of Tom Graveney - and they came up short."

Gifford was able to cash in that day on the joys of uncovered pitches, as did many a decent spinner in his day, most notoriously Kent's 'Deadly' Derek Underwood.

But, despite the frustration of spending too much of his is career playing second fiddle to Underwood when it came to England selection, and a record of six times being a beaten finalist, Gifford's only regret remains that he did not get the chance to play more one-day cricket.

"I lost there four times with Worcestershire, once with Warwickshire and once more when I was coaching Sussex.

"Even my brother Dave lost there when he played there in the Village final for Lindal Moor in the 1977 final (ironically against Worcestershire side Cookley).

"So the Gifford family do not have a great track record at Lord's.

"But I loved it. In fact, if it had not been for one-day cricket, I might have packed in the game sooner than I did."