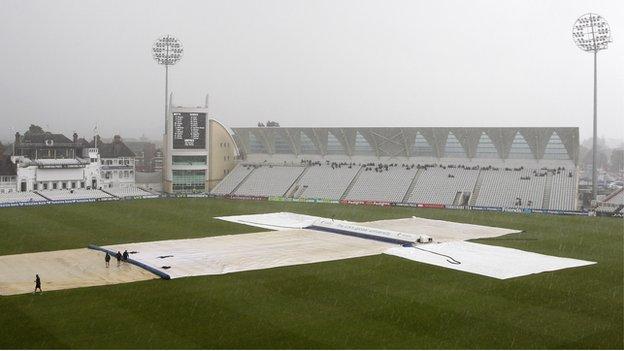 Rain was the only winner on the final day at Trent Bridge as the Championship game between Nottinghamshire and Warwickshire ended in a draw.

The home side were denied a chance to chase a target of 211 when the game was abandoned in mid-afternoon.

Having taken 10 points from the game, Notts are now in sixth spot, just seven points ahead of neighbours Derbyshire, who have climbed out of the drop zone.

The Bears took eight points to keep them fifth in the table.

Dougie Brown's injury-ravaged side are now 32 points clear of danger with two games left, and should be safe, barring any major calamities, but any slender hopes they had of retaining their title have now gone.

With Notts waiting to start their second innings and facing a modest target, they were clearly the more frustrated of the two sides, having been denied the chance of a third Championship win of the season, which would have moved them even further away from the bottom two.

However, they do have a game in hand on both Derbyshire and eighth-placed Somerset, who they meet in Monday's YB40 semi-final at Trent Bridge.

They then close out their Division One programme with trips to Lord's to play Middlesex and Chester-le-Street to face title-chasing Durham, before again facing Somerset in their final Championship match at Trent Bridge.

Warwickshire, once again badly hit by both injuries and international call-ups going into this contest, have a free week in which they will hope for one or two players to regain full fitness, before facing Surrey at home and Derbyshire away in their final two matches.