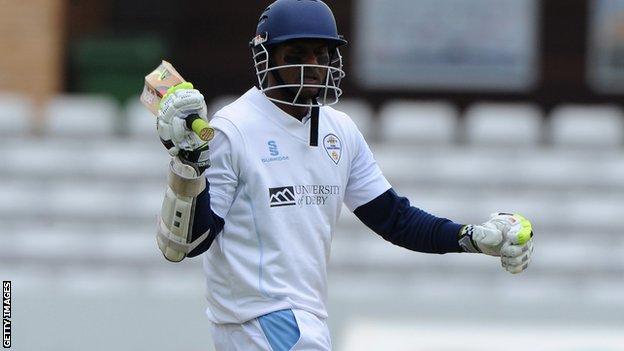 Shivnarine Chanderpaul used his vast experience to steer Derbyshire to a nail-biting Championship win over Somerset on the final day at Taunton.

The visitors reached 244-8 to scrape home by two wickets, with Chanderpaul 74 not out after being dropped on 64.

Victory lifted them off the bottom of Division One and left Somerset and Surrey in the relegation places.

India leg-spinner Piyush Chawla claimed 5-97 for match figures of 10-208, but it was not enough for the home side.

The win, Derbyshire's third in four games, took them to 116 points, with Somerset on 115 and Surrey - who have a game in hand on both - on 100. A team is awarded 16 points for a victory, with eight bonus points available depending on their first-innings performance.

Derbyshire began the final day on 127-4, needing another 117 for victory, and immediately lost Richard Johnson, caught behind off Chawla for a duck.

Alex Hughes made 33 as he and West Indies batsman Chanderpaul added 68 priceless runs, but he was then lbw to Jack Leach (3-54) and the match swung back towards Somerset as Chawla accounted for Tom Poynton and David Wainwright.

However, Craig Meschede crucially dropped Chanderpaul, on 64, at mid-on and the visitors only needed six more for victory at lunch.

The home side took the new ball one over after the restart, but four leg byes off Lewis Gregory brought the game to an end.

Somerset face Surrey at Taunton next week in a game which could effectively be win or bust in terms of relegation, while Derbyshire also have home advantage as they take on leaders Durham.

"A dramatic and narrow victory for Derbyshire keeps their hopes of avoiding relegation very much alive.

"With two games left to play Derbyshire will feel they have every chance of staying in Division One for another season.

"Although table-topping Durham are up next, Derbyshire's current form means they will be full of confidence going into that game, and a win in either that match or the final one against Warwickshire may be enough to keep them up."