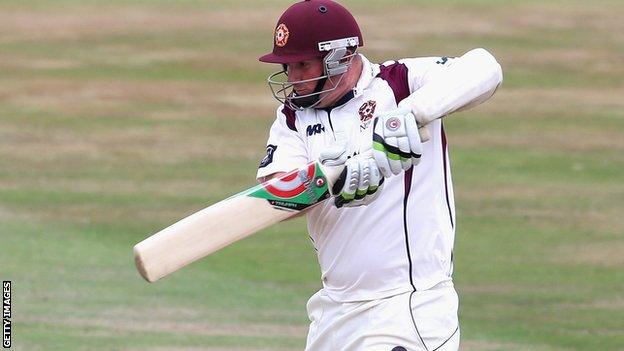 David Sales helped himself to a half century for promotion-chasing Northants as their game with Hampshire petered out to an inevitable draw.

The second-placed visitors earned eight points, just enough to ensure their destiny remains in their own hands.

Hampshire added 30 for their final wicket in the morning before being bowled out for 545 - a lead of 107.

Sales then hit 11 fours in an unbeaten 66 before the match came to an end when Northants declared on 135-3.

They have no fixture next week, but a 29-point advantage means third-placed Essex cannot overtake them even if they beat Kent in their game in hand.

Australian seam bowler Trent Copeland will play no further part in the promotion run-in, having completed his second stint for Northants this summer with figures of 1-75 in Hampshire's innings, which did not reflect his impressive overall contribution of 45 wickets and 247 runs.

The match was dominated by Rob Keogh of Northants and Hampshire skipper Jimmy Adams, who both made double centuries, and the former was at the crease when a halt was called, having added 14 not out to his first-innings 221.