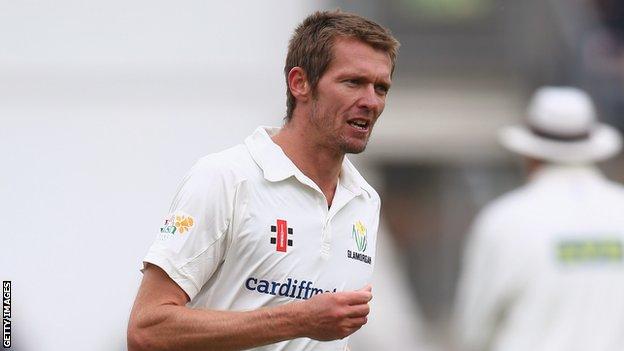 Michael Hogan has agreed a contract extension which will keep him at Glamorgan until the end of the 2016 season.

The Australian seam bowler has been a huge success in his first season in Cardiff, topping the club's 40-over and championship bowling averages.

"I'm really pleased to extend my contract with Glamorgan," he said.

Glamorgan face Hampshire in the semi-final of the YB40 tournament in Southampton on Saturday.

Hogan was recruited from Western Australia following the departure of James Harris to Middlesex at the end of the 2012 season.

His form with the ball has been a highlight in a generally disappointing season for the Welsh county, who failed to qualify for the knock-out stages of the Pro 20 tournament and are lying sixth in Division Two of the LV=County Championship.

The Aussie claimed a career-best 7-92 against Gloucestershire at Bristol and could become the first Glamorgan bowler since 2003 to take a hundred wickets in a season in all forms of the game.

Hugh Morris, who will take up a joint role as the county's chief executive and managing director in 2014, said he was pleased with Hogan's new contract.

"Michael's contribution with the ball this season has been outstanding and his figures clearly show what a good player he is," said Morris.

"We're determined to develop our young welsh cricketers, but equally important is the need to retain the best players we already have.

"The new contracts for Jim Allenby and Michael Hogan are testament to this and highlight how the Club is moving forward."