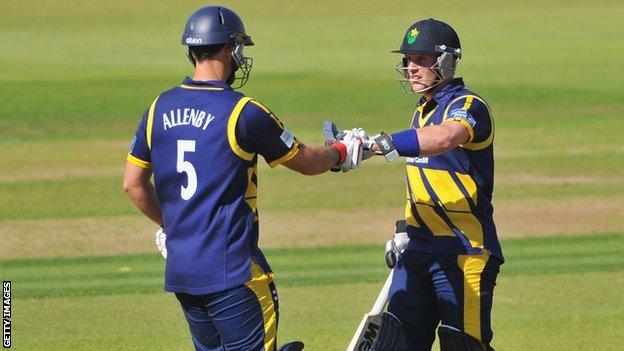 Jim Allenby says winning a trophy this season will be a huge achievement for Glamorgan after they moved into the YB40 final by beating Hampshire.

Glamorgan batted first in Saturday's semi-final at the Ageas Bowl and made 234-4, with Allenby scoring 74 runs.

"It's massive for these supporters. You can see the smiles on their faces and the players' faces, it means the world," said the Australian.

"We've got to Lord's now and it's one more win towards our goal of winning a trophy.

"I've been lucky enough to play in a few [T20] finals days a few years ago and that was great, but this is a different level again. This is tradition as well as the atmosphere and we can't wait.

"To be honest we were probably a bit distracted this week in the County Championship game [where they lost by seven wickets at home to Kent] and that showed in our poor performance.

"But I think everyone will forgive us because we had this win."

Glamorgan will now face the winners of Monday evening's second semi-final between Nottinghamshire and Somerset in the final at Lord's on 21 September.

The Welsh county have not won any silverware since 2004, when Robert Croft captained Glamorgan to the one-day league title, and it will be their first Lord's final for 13 years.

Allenby was modest about his man-of-the-match performance and stressed the win over defending champions Hampshire was because Glamorgan operated as a strong unit.

"Three or four guys chipped in with the bat and the bowlers did a good job," added Allenby, as he shared an unbroken fifth-wicket stand of 84 with Ben Wright, who scored 47 not out off 28 balls.

"It was my day in the end to get the most runs but you can't overlook Ben Wright.

"Murray Goodwin came in and changed the tempo and the bowlers chipped in throughout the innings.

"We did what we've been doing all year and it came off, which was magnificent."