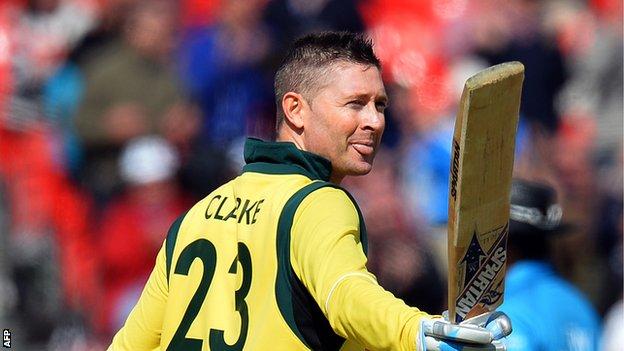 Michael Clarke scored a century as Australia beat England by 88 runs in the second one-day international to go 1-0 up in the five-match series.

George Bailey supported Clarke with 82 off 67 balls to hand Australia a best ODI score against England in the UK.

Kevin Pietersen, Eoin Morgan and Jos Buttler made fifties but the hosts were dismissed for 227 with 5.4 overs left.

"That is a thrashing. England were always going to struggle when they had to chase over 300. The first 10 overs with Mitchell Johnson getting the two wickets, England only flickered. If Kevin Pietersen stayed in longer, anything was possible. Morgan and Buttler played well but there was nothing else to trouble the Aussies. An emphatic victory for Michael Clarke's men and England will have to put their thinking caps on. That was some hiding."

England named a strong batting line-up with Ben Stokes at number eight but were arguably a bowler light, relying on Ravi Bopara and Joe Root to deliver 12 overs.

But Morgan's side got off to a good start when Steve Finn dismissed Shaun Marsh caught behind with only the fourth ball of the match.

There was controversy as Shane Watson was adjudged lbw the very next ball, but reprieved by the Decision Review System when third umpire Aleem Dar viewed that the Australian number three had edged it.

Watson was eventually out for 38 to Bopara, as England opted to review Richard Kettleborough's not out decision and Dar ruled there had been an edge to Buttler.

Aaron Finch made 45 before holing out off James Tredwell, although it was England's spinner who was repeatedly punished on a good pitch by Clarke and Bailey.

The pair were in breathtaking form as they put on 155 for the fourth wicket to take the game away from England.

Bailey struck four sixes before eventually falling to Bopara down the leg side while Clarke nicked behind to Boyd Rankin not long after completing his first one-day international century against England and eighth in all.

That left Morgan's side needing a record ODI run chase of 316 and their chances vanished after a slow start to their innings.

Opener Michael Carberry, making his home ODI debut, struggled before picking out Clarke at backward point off an inspired Mitchell Johnson for just four and Jonathan Trott departed in the same over for a duck attempting to fend off a wicked lifting delivery.

After Joe Root was bowled by James Faulkner, Pietersen, appearing for the first time as a ODI opener on home soil, gave England a glimmer of hope with two sixes in his 66-ball knock.

But once he fell to Watson for 60 it was game over with Bopara falling caught and bowled to Adam Voges before Morgan went for 54, caught in the deep to give Clint McKay a deserved first wicket.

Although Buttler scored a defiant 75 off 65 balls before giving Fawad Ahmed his first ODI wicket against England, the hosts were bowled out for just 227 and will head to Edgbaston on Wednesday with plenty of food for thought.