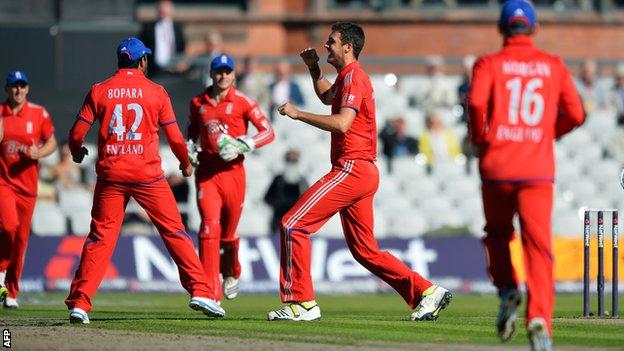 And Australia racked up a record ODI score against England in the UK of 315-7, going on to win by 88 runs.

"I don't think we were a bowler short, but we weren't particularly happy with our bowling performance," said Morgan.

"I'm not concerned by the balance of the side. We have a lot of bowling options. Not enough people put their hand up today."

England have chosen to rest senior bowlers James Anderson, Stuart Broad and Graeme Swann to ensure they are fit for the Ashes series in Australia later this year.

They are also without Tim Bresnan because of a back injury and their only other bowling options in the squad ahead of the third ODI at Edgbaston on Wednesday are the uncapped pair of Somerset 19-year-old Jamie Overton and Sussex paceman Chris Jordan.

England's decision to bowl after winning the toss looked questionable after Australia ran up their huge total but Morgan said: "I don't think I would have changed my decision to bowl first.

"Regardless of what we did first, we didn't restrict them enough - 300-plus on that wicket was above par but it was well within our capabilities and we needed someone to lead from the front at the top of the order. That didn't happen."

"It's an important series - and as I said before we haven't played as well as we'd like, certainly in the shorter form of the game, over in the UK for the past few years," he said.

"Today's only the start. We've got three more really important games and hope we can continue to perform the way we have.

"We've just got to make sure we keep working hard and keep trying to get better - because there's no doubt England will get better from today."