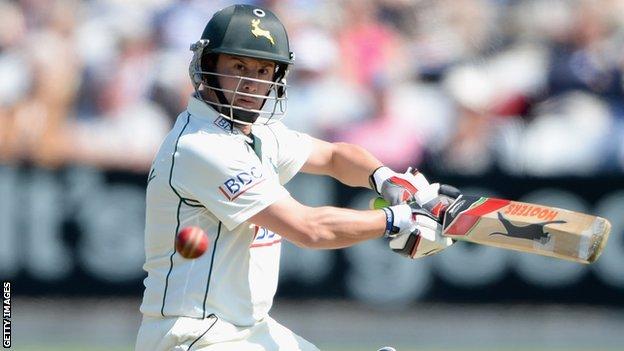 Nottinghamshire's Steven Mullaney was 12 runs short of his second ton of the season when bad light ended day one with the visitors on 161-2.

Mullaney, making his first appearance at Lord's in his seven-year career, eased his way to 88 not out.

Earlier, Notts lost Riki Wessels to Neil Dexter for just 14, before Mullaney and Michael Lumb (54) added 115 for the second wicket.

Lumb has dismissed by Ollie Rayner just before the enforced early finish.

"It was a slow first day as Nottinghamshire's batsmen resisted the overcast conditions that Middlesex hoped would aid their bowlers when winning the toss.

"Only 161 runs were registered in the 70 overs possible, but the hosts would have expected more than the two wickets they claimed.

"With the new ball available not long into the second day there is still a chance of a clatter of wickets. But the visitors will hope to plod on to put scoreboard pressure on when they take the field."