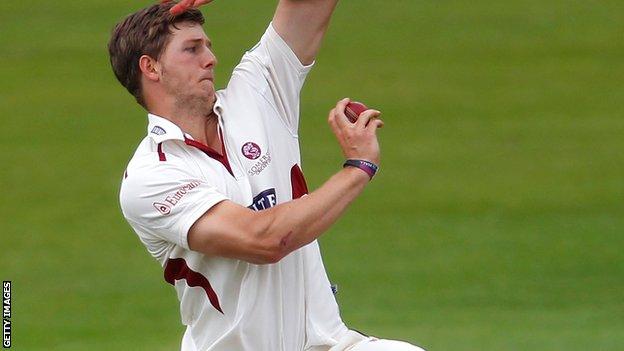 Craig Meschede was the pick of the Somerset bowlers as Surrey closed day one on 195-8 at Taunton.

Meschede (3-37), Alfonso Thomas (2-23) and Piyush Chawla (2-58) led the way for the hosts as relegation-haunted Surrey lost wickets on a regular basis.

The visitors reached 31-0 before losing three wickets inside four overs.

After slumping to 130-7, Surrey skipper Gareth Batty (39) shared a stand of 64 with Stuart Meaker (30no), departing six balls before bad light halted play.

The late wicket of Batty confirmed Somerset's dominance on the opening day in this battle of the bottom two in Division One.

Surrey had made a steady start before Meschede turned the tide in only his second over, first trapping Dominic Sibley in front for 10 and then having Hashim Amla caught behind for nought, before Thomas dismissed Rory Burns in the same fashion one over later.

The Brown Caps struggled to 130-7 before Batty and Meaker came together to drag them towards a more competitive score.

But the loss of Batty in the penultimate over of a day curtailed to 81 overs leaves them still five runs short of a valuable batting point.

"A fascinating opening day at Taunton that saw Somerset's bowlers take a grip on proceedings, but then Surrey stage a late fightbackt.

"After winning the toss and batting first, Surrey had been reduced to 130-7 after tea. But Batty then helped Meaker put on 64 for the eighth wicket until falling just before the new ball was taken.

"First priority tomorrow for Surrey will be 200 and a first batting point, and then as many more runs as possible before their bowlers go to work with the ball."