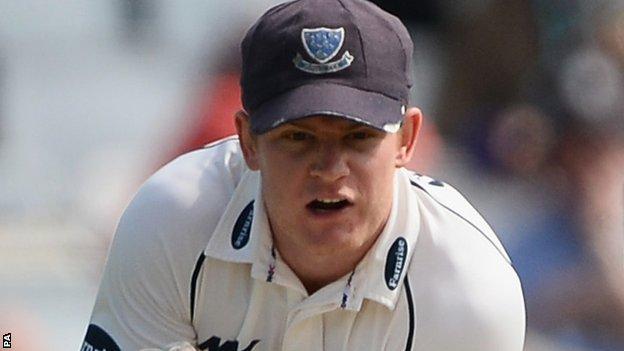 Sussex wicketkeeper Ben Brown played the key role with an unbeaten 78 as title-chasing Yorkshire were held up in their frustrated attempts to bowl out the hosts on day one at Hove.

After arriving at the wicket with his side on 114-5, Brown was still there when weather forced an early close with Sussex on 276-9.

England left-armer Ryan Sidebottom (3-44) was the pick of the Tykes' attack.

That was enough to guarantee maximum bowling points for Yorkshire, who began the day trailing Division One leaders Durham by 14.5 points.

Opener Chris Nash made 35 for Sussex, for whom Mike Yardy (29) and Steve Magoffin (26), in a 74-run stand with Brown, also made valuable runs.

"This was a day which Yorkshire will feel they shaded after electing to bowl first, but still with an element of disappointment that they weren't able to dismiss Sussex for around 200.

"There was a distinct lack of application amongst the top Sussex order as they slipped to 137-6, but a stand of 74 between Ben Brown and Steve Magoffin allowed them to recover close to what appears to be a par score.

"Brown cashed in on being dropped on 14 to make his first Championship fifty since May and, when bad light ended play over an hour from the end, both sides probably had cause for satisfaction."