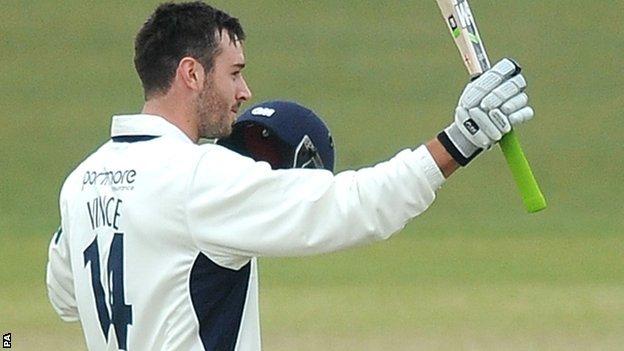 James Vince plundered his third County Championship century of the season as Hampshire had the better of the opening day against Worcestershire at New Road.

Coming in at 23-2, after two early strikes from Alan Richardson, Vince made an unbeaten 106 out of the visitors' promising total of 197-3 before weather ended play for the day.

Vince shared a third-wicket stand of 158 with Liam Dawson, who made 70.

Dawson was run out after a smart piece of work in the covers by Ross Whiteley.

But both survived dropped catches, each having survived chances to Moeen Ali at slip.

Vince's was the most costly, on 4, off Graeme Cessford, after skipper Jimmy Adams had already gone for a duck, while Dawson enjoyed a life off Richardson on 47.

After an uninterrupted morning in this mid-table Division Two contest, the first of the day's rain breaks delayed play until 15:00 BST after an early tea had been taken.

But any prospects of a long third session were ended just 39 minutes later when play was ended for the day, first by bad light before prolonged rain.