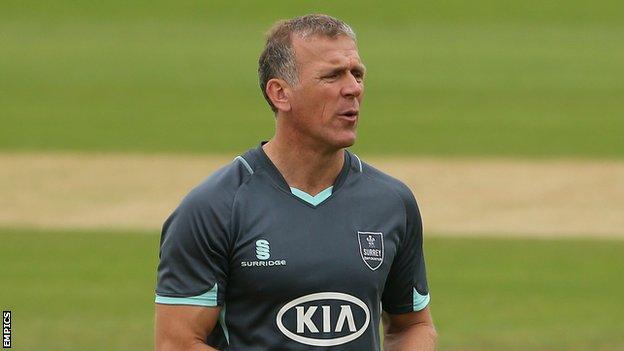 Surrey executive director Alec Stewart believes they need two wins to avoid relegation from Division One of the County Championship.

They have only won one four-day game and are bottom of the table.

Stewart told BBC London 94.9: "We have still got to win two more games, minimum. With only three games to go that is less than straightforward.

"The lads have got to play better from the first ball. They know what they have to go and do."

We all take responsibility. We will not just put it on the players

Surrey's next game, away to Somerset, who are second from bottom and 15 points ahead of them, could be pivotal to their chances of survival.

"It was always going to be a big game," said former England captain Stewart.

"Six games out we knew it would be a huge game.

"When we went to Durham [in August] we thought with three wins we should be okay and with four we will be. We've only chalked up one."

"We all take responsibility," Stewart added.

"We will not just put it on the players. We have got to make sure we prepare the players well, we talk to them and they listen.

"They will have their own thoughts and ideas and then they need to go an execute them. If you don't you get punished."