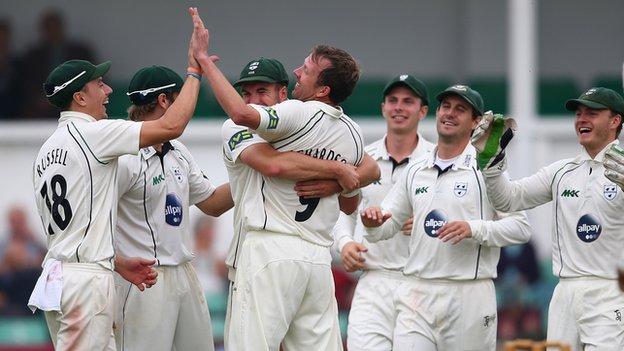 Worcestershire director of cricket Steve Rhodes insists that there will still be an overseas player at New Road next summer to help the continued development of his young side.

Rhodes has had a mixed success rate with his non-English signings since taking over in 2006.

But he insists: "All I can say right now is that we'll have one.

Australian batsmen Phil Jaques and Phil Hughes have both proved a hit at New Road in recent years, as was Pakistan spinner Saeed Ajmal.

And the form of Zaheer Khan in 2006 was so good (a season's best 78 Championship wickets) that it earned him a recall to the Indian Test team.

But there have been some flops, most notably Shoaib Akhtar, for the second half of the 2005 season, and Australian paceman Doug Bollinger in 2007.

And, although injury robbed them of big-hitting New Zealand all-rounder Jacob Oram for the FLt20, the county were right to expect a bit more this summer of Sri Lanka Test batsman Thilan Samaraweera, who made 702 runs in 15 Championship matches, at 39.00.

Instead, Worcestershire's two star performers this summer turned out to be two Midlanders, Birmingham-born Moeen Ali, 26, who scored more Championship runs (1375) than any other batsman in the country, and 38-year-old Staffordshire-born Alan Richardson, whose 69 scalps were bettered only by Durham's Graham Onions, still making him Division Two's leading wicket-taker.

There is also the case study of Durham, who won the Championship this summer without the help of any overseas assistance.

But Rhodes believes that overseas players can contribute not just on the field, but off it too - in terms of the professional guidance that they can offer.

"The effect they can have is huge," Rhodes told BBC Hereford & Worcester.

"We lack a bit of experience and quality which that international flavour can provide.

"Not just on the field, but in what they can pass on to the rest of the guys."

If Worcestershire were to somehow pick their way through the busy 2014 international cricket schedule, which limits the availability of so many potential targets, it could yet turn them into potential promotion candidates in a year's time.

Rhodes' men picked up the same number of Championship wins this summer as Northants, the team promoted in second place. Yet they finished 35 points adrift, having drawn three games fewer and earned 26 less batting bonus points, Worcestershire's tally of 29 having been bettered by every other team except Division Two backmarkers Sussex.

"We've lacked consistency," said Rhodes. "We've beaten some good sides, not just this in the Championship, but in one-day cricket too, but you need consistency.

"We might not have quality and depth of squad that some counties possess, but we still have some good young players.

"There's many exciting things to look forward to.

"The biggest result for Worcestershire County Cricket Club this summer has been to secure the services of so many good players.

"Moeen Ali starts a five-year deal next year. He's had a wonderful season.

"Jack Shantry, who's had a good season. and Tom Fell. who's a player for the future, both have two years. And Ross Whiteley, who's shown what he can do, has three years.

"Players leave us. We're used to that. But, for these lads to want to stay is a big advantage for Worcestershire. We're now starting to get a nucleus.

"It means that, over the next three years, we'll have some sort of stability. With that, we may able to grow and challenge for things. And, on our day, we'll win more games than we'll lose."

Meanwhile. Worcestershire have had two of their young players, Ed Barnard and Joe Clarke, picked for England's squad for the tri-series against Pakistan and the United Arab Emirates in Dubai, Sharjah and Abu Dhabi in December, followed by the Under-19 World Cup in February 2014, also in the UAE.