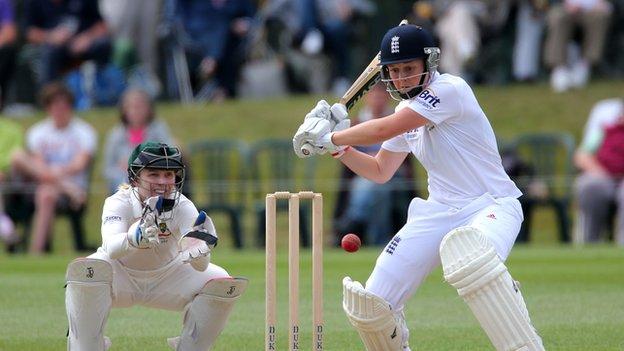 England's Heather Knight will miss the tour to the West Indies next month after tearing her hamstring in the final match of the women's Ashes.

The Plymouth-born player sustained the injury against Australia in Durham, but hopes to be back in time for the return series in January.

"I'm looking at two to three months out, but fingers crossed I'll be there in January," she told BBC Radio 2.

Knight was England's player of the series, scoring 157 in the only Test.

The 22-year-old said she is on crutches as she recovers from the injury, which occurred when she got herself in an awkward position and was caught behind.

Knight had to be helped off the field by England's physio and team-mate Laura Marsh.

"I tried quite unsuccessfully to do the splits, I don't think flexibility is my forte so it was quite painful," she said.

Knight added on Twitter: "I'm working towards being fit again for the return Ashes Down Under.

"I've got the best people around me and will be back on my feet again in no time!"