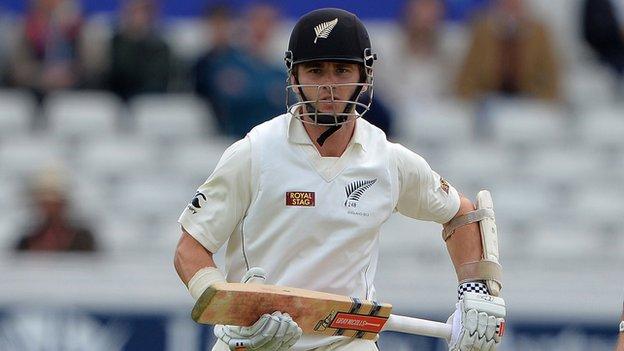 Adam Lyth and Kane Williamson both hit half centuries as Yorkshire battled back at Hove on day two to close in on a first-innings lead against Sussex.

Sussex were bowled out for 292, Ryan Sidebottom ending a 38-run last-wicket stand by removing last man Lewis Hatchett, leaving Ben Brown 84 not out.

Lyth (92) then shared a second-wicket stand of 164 with Kane Williamson.

Williamson batted over five hours to end the day on 80, as Yorkshire ground their way to 246-4 at the close.

Zaidi's glee by the sea

After Lyth fell to 32-year-old debutant Ashar Zaidi, Sussex finally got some reward for their perseverance on a docile pitch offering little pace or sideways movement once the new ball had lost its hardness, managing two more scalps as Andrew Gale and Jonny Bairstow both went before the close.

Their best bowler was once again the country's leading wicket-taker Steve Magoffin, who snared fellow Australian Phil Jaques during an excellent new-ball spell.

But, with six wickets in hand and New Zealand all-rounder Williamson scenting a first century for Yorkshire, having made 97 in the Tykes' last game against Durham at Scarborough a fortnight ago, the visitors have the chance to patiently build a lead on day three.

Title hopefuls Yorkshire, who began this game trailing Division One leaders Durham by 14.5 points, have so far added one batting point to the maximum three bowling points they acquired on Wednesday. But, if they are to claim maximum batting points, they will have to plunder 154 runs in 22 overs on Friday morning.

"Yorkshire remain the dominant side, although two late wickets checked their progress.

"And the decision to send a nightwatchman in seven overs from the scheduled end was perhaps a little negative, given their need to win the game.

"The weather forecast remains a concern for Yorkshire but, with Williamson having so far played a watchful innings, their priority should remain building as big a lead as possible but at a good rate."