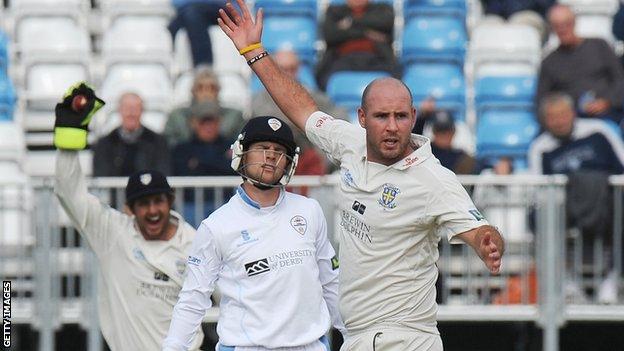 Chris Rushworth and Graham Onions took nine wickets between them to give Durham hope of a victory which may move them closer to the Championship title.

Rushworth took 5-47 and England paceman Onions 4-62 as struggling Derbyshire were finally dismissed for 298.

Paul Borrington (75) and Shivnarine Chanderpaul (53) shared a third-wicket stand of 106 but the last seven victims fell for 56 runs to the new ball.

Relegation-threatened Derbyshire only had time to reach 99-1 on a rain-affected first day and little happened in the morning session in better weather on the second day.

The hosts added only 74 runs for the loss of Wayne Madsen, who fell lbw to Onions for his overnight score of 32 to the fourth ball of the day.

Borrington reached his half century before the interval, while Durham old boy Chanderpaul was dropped in the slips by Scott Borthwick when he was on 22.

The afternoon also progressed serenely until Durham took the new ball to roar back into the game.

Borrington's departure made it 242-4 but relegation-threatened Derbyshire then lost three wickets with the score on 248, two short of a third batting point.

The Championship leaders claimed their third bowling point after the break and then set about knocking off the arrears.

Mark Stoneman hit three fours in an over off Mark Footitt on his way to a 44-ball 30 before falling to Tony Palladino to make it 49-1.

Palladino also captured the wicket of Keaton Jennings for 16 before stumps.

"By mid-afternoon this game looked like it was suffering a slow death as Derbyshire plodded along in no hurry and Durham seemed unable to get the wickets they were looking for.

"But it all changed when Shiv Chanderpaul was out for 53 just after lunch, having been dropped earlier in the day on 22.

"The Derbyshire innings then collapsed as Durham took four wickets for six runs in the first four overs with the new ball. And, with Durham racing to 82-2 at the close, the game is very much alive again."