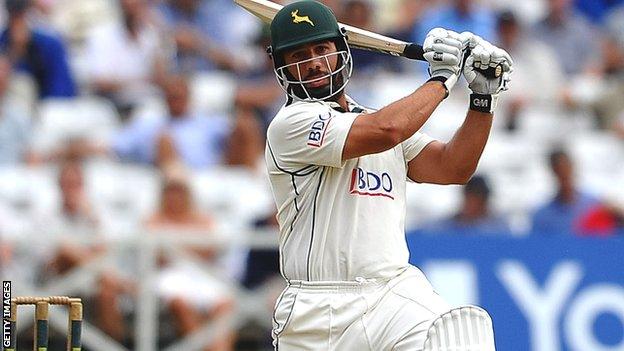 Steven Mullaney (125) added 37 to his overnight score, while Adams accelerated Notts to a declaration.

The former New Zealand international smashed five sixes in making 80 off 76 balls, while David Hussey hit nine boundaries in his 67 from 64 balls.

Another draw on the cards?

Mullaney, playing at Lord's for the first time in his career, reached three figures when Rogers misfielded at mid-off and he was able to scamper a quick single.

His near six hours at the crease came to an end when he skied a Gareth Berg (2-78) ball to Neil Dexter at deep square leg. Samit Patel hit seven fours in making 47, but James Taylor was dismissed for only nine by Tim Murtagh in front of England selector James Whitaker.

Hussey and Adams then added quick runs, with Chris Read contributing an unbeaten 27.

Rogers smashed a half century from 71 balls to help Middlesex reach the close without the loss of any wickets.

"Middlesex opened their first innings with a composure that has perhaps been lacking of late as their title challenge faltered.

"Replying to Nottinghamshire's 430-7 declared at tea, there was the chance that the hosts could come under scoreboard pressure.

"The forecast for the final two days suggests plenty of rain delays and, barring a spectacular collapse by either side, a draw is the favourite on a pitch that has offered little to the bowlers."

"Far from just being a fact-finding mission ahead of the YB40 final, Notts made the most of the Lord's conditions to grab four precious batting points, thanks to some wonderfully entertaining strokeplay.

"After Steven Mullaney had been removed for a Championship-best 125, Samit Patel, David Hussey and Andre Adams entertained the crowd with some violent attacking.

"Adams will probably never have a better chance of scoring his first ton for Notts but went trying, caught on the long-off boundary."