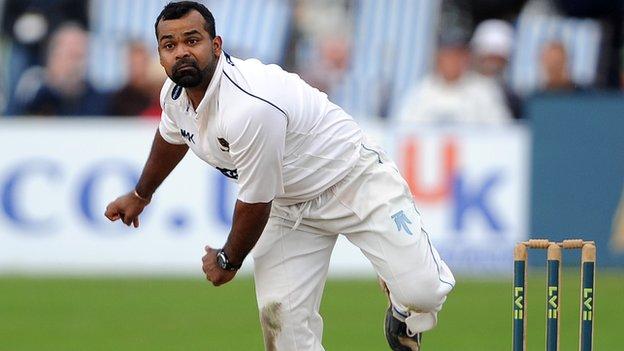 Sussex spinner Ashar Zaidi finished with a four-wicket haul on his debut, but title-chasing Yorkshire still ended the day with the upper hand at Hove.

New Zealand all-rounder Kane Williamson failed to add to his overnight 80, one of six Yorkshire wickets to fall when play finally got underway after lunch.

But the visitors hit back before the close, striking twice as Sussex closed on 48-2 - a lead of just 14.

Ryan Sidebottom's third-ball dismissal of Luke Wells was followed by Liam Plunkett's removal of Mike Yardy to offer Yorkshire hope that they might yet be able to force victory.

Sussex paceman Steve Magoffin, Division One's leading wicket taker, took his tally to 61 for the season, ending with a miserly 2-59 from 37 overs.

His efforts helped limit Yorkshire to just three batting points but, although the weather may yet already have had too big an effect on this game, the Tykes are still in a better position to win on the final day than their title rivals Durham, who are away against Derbyshire.

"Things didn't go to plan for Yorkshire when they lost their last six wickets for 83 runs, which gave them a lead of only 34 when it probably should have been much more.

"However, the wickets of Wells and Yardy before bad light ended play early makes for an interesting final day.