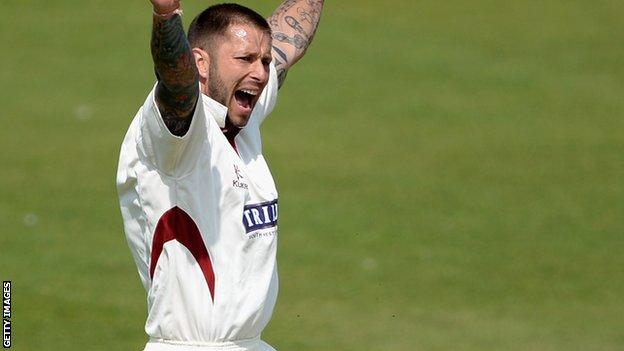 Lewis Gregory and Peter Trego each took two wickets as Surrey stumbled to 97-4, before rain held up Somerset's victory bid on the third day at Taunton.

Gregory (2-33) had opener Sibley (12) caught by Marcus Trescothick and then dismissed Hashim Amla for a pair.

But both batsmen fell to Trego (2-26) before rain forced the players off for the day shortly after 14:00 BST, with Surrey's lead just 32 runs.

Surrey will feel they could yet set up a tricky run chase for the hosts, who lie just one place and 15 points above them in the table.

"A rain-truncated day but still a very good one for Somerset, taking four Surrey wickets, including the prized one of Hashim Amla for a pair.

"Somerset bowled well but they were helped by some poor shots by the Surrey batsmen - not least Ricky Burns, who, with the rain already falling, edged what proved to be the last ball of the day into the slips, where he was beautifully taken by James Hildreth."

"Somerset will be happy with their progress in the 29 overs possible today. Surrey, starting the day 13-0 and trailing by 52, found themselves in trouble when Lewis Gregory dismissed Dominic Sibley for 12 and Hashim Amla for a pair.

"An excellent third-wicket stand of 63 between Vikram Solanki and Rory Burns took Surrey into the lead, but Peter Trego then got rid of Solanki for 36 and had Burns caught by James Hildreth at first slip for 40.

"After Burns departed the heavens opened and no further play was possible.

"Surrey know they will have to bat very well on the final morning as Somerset will be hunting quick wickets.

"If Surrey can get through the first hour and push on the pressure will switch to Somerset chasing on the final day. One thing is for certain - it will be tense."