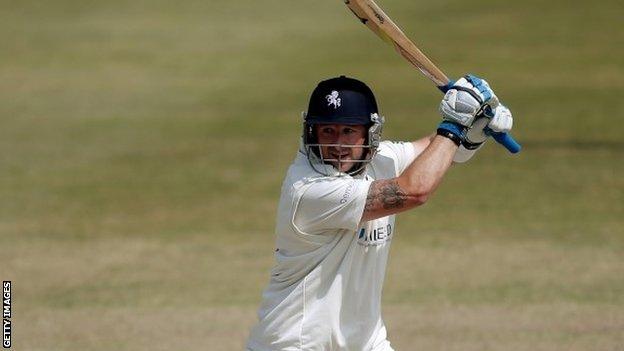 Essex's hopes of promotion took a severe knock as they failed to force the victory they needed against Kent.

The result means that Essex effectively have to win their last two games to have any hope of promotion.

Darren Stevens and the rain were the main thorns in Essex's side, with the weather preventing play until the afternoon.

And Stevens took full advantage of an early reprieve to make 67 and put the game out of the home side's reach.

Spinner Monty Panesar eventually had Stevens caught by Owais Shah but the damage had already been done.

Kent resumed on 113-4 with Essex hoping for early wickets after the rain cost the home side precious time, with only 28.4 overs played all day.

Opener Sam Northeast did depart lbw to bowler Reece Topley from the 12th ball once play did start and Geraint Jones also went after making 12 from 13 balls.

But Stevens settled the ship before chipping a Panesar delivery to Shah to make it 198-7 and in the fading light Kent's eighth-wicket pair of Calum Haggett (15) and Mark Davies (10) extinguished any hopes of an Essex win.

The result, which meant table-toppers Lancashire earned promotion to Division One, leaves Essex 21 points behind second-placed Northants as the season draws to a climax.

"With four sessions lost to rain Essex were denied the chance to force a deserved victory in this match. Once again it was Darren Stevens who made the difference for Kent against Essex.

"He made the most of being dropped at second slip and by the time he drove Monty Panesar to cover the game was effectively saved. Essex now need to win their last two games and hope that Northants win neither of theirs."

"Darren Stevens compounded the weather misery for Essex with a second innings 67 that took him to within five runs of 1,000 in the County Championship this summer and thwarted the Essex attempts to force victory.

"Play couldn't get underway until mid afternoon and once Kent had taken the lead the game was destined for a draw. Speaking to BBC Radio Kent, Stevens said: "I rode my luck - a couple of chances went down but I was concentrating on getting us a lead."