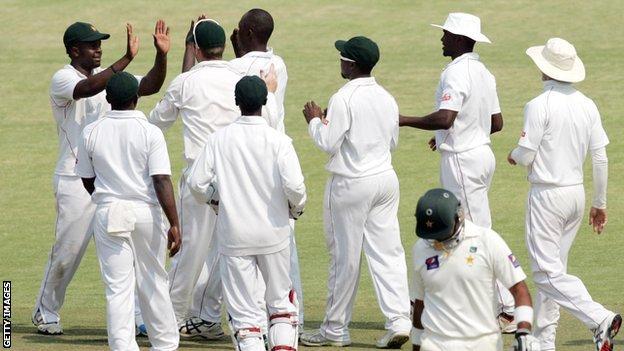 Zimbabwe have recorded a landmark Test victory by beating Pakistan by 24 runs in Harare to draw the series 1-1.

It was Zimbabwe's first Test win over a side other than Bangladesh since their victory over India in 2001 - and only their 11th success since their admission to Test cricket in 1992.

Pakistan captain Misbah-ul-Haq shepherded the tail well to make 79 not out, before he ran out of partners.

Misbah lost wicketkeeper Adnan Akmal (20) early on the fifth morning to leave them six down, but with the assistance of Abdur Rehman, Saeed Ajmal and Junaid Khan, the visitors moved to 238-8, 26 short with two wickets remaining.

But seamer Tendai Chatara struck, having Junaid caught at gully to pick up his fifth wicket and end a defiant innings in which the paceman had lasted 32 minutes, and survived 18 balls as Misbah tried to farm the strike.

Last man Rahat Ali pushed his first ball for a single, but was run out off the very next delivery after a mix-up with Misbah as Zimbabwe completed their victory.

Chatara's haul of 5-61 earned him the man-of-the-match award.