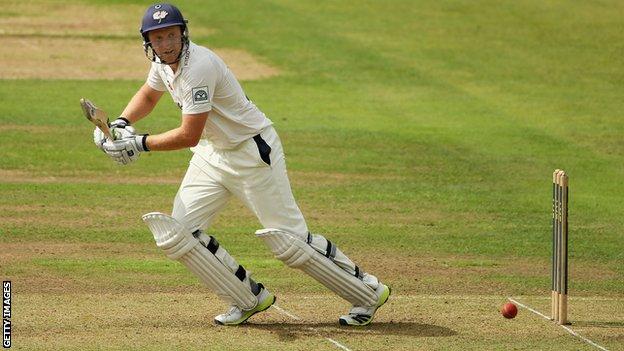 On a day heavily restricted by rain, Yorkshire were grateful for Andrew Gale's 66 which rescued them from 1-2 to close on 109-3 against Middlesex.

With the hosts looking to maintain their title ambitions, Adam Lyth and Phil Jacques fell early to Corey Collymore and Tim Murtagh respectively.

Skipper Gale and Kane Williamson led the recovery but rain halted play at 90-2 in the afternoon session.

Play briefly resumed at 16:00 BST and Gale departed for 66 before bad light.

With the news that league leaders Durham had skittled out Nottinghamshire for 78, Yorkshire need every bonus point they can get to stay in the title hunt.

Even full bonus points might not be enough if Durham take 21 points from their Chester-le-Street encounter.

But Collymore trapped Lyth in front and Jacques feathered Murtagh through to wicketkeeper John Simpson, leaving the Tykes in dire straits.

Gale then provided a crucial knock, batting positively alongside New Zealand batsman Williamson who slowly crept his way to 23 before a downpour disrupted Yorkshire's comeback.

After a two-hour delay, Middlesex struck almost immediately as Gale lambasted his decision to chase a wide Collymore delivery from which Simpson made no mistake.

Williamson (34 not out) and Bairstow (1 not out) then added a further 11 runs before bad light ended day one.

"Corey Collymore and Tim Murtagh tormented the top four batsman but only claimed two wickets before adding the late scalp of Gale.

"The scoring rate has been slow and, with only a little more than half of the scheduled day possible due to the weather, Yorkshire haven't got away from the visitors yet and are likely to face a similar test on the second morning."