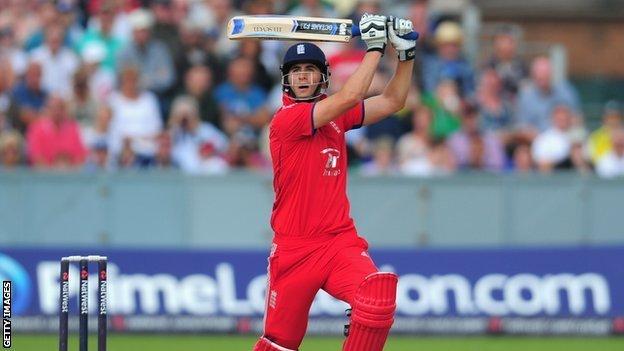 England Twenty20 star Alex Hales is hopeful of playing in next season's Indian Premier League after initial talks with his team, Nottinghamshire.

Hales was barred by the county from taking part in 2013 because it clashed with the start of the English season.

But he expects permission to enter the next IPL player auction in February.

"I'm in talks with Notts at the moment about how it's going to work but hopefully everyone comes out happy," Hales, 24, told BBC Sport.

"I would definitely love to be involved in the auction next year - I think it is a three-year auction coming up so I'd love to have the chance to be in it," added Hales, currently the top-ranked T20 batsman in the world.

"Talks are quite early but I'm pretty hopeful that both parties will come to an agreement.

"It would be very frustrating [if Notts said no] but the early signs that I have got from the coach are that we will be able to come to some form of agreement and I'll be able to go in the auction."

Hales rose to the top of the ICC T20 batting rankings after scoring 94 against Australia in August, his sixth fifty in 21 England innings.

He scored 89 off 52 balls on his debut for Melbourne Renegades in the 2012-13 Big Bash, Australia's domestic T20 league.

But he has struggled in first-class cricket this season and was dropped for Nottinghamshire's draw with Middlesex last week.

English players who are contracted by counties or the England and Wales Cricket Board are often less attractive to IPL franchises because they are unable to play a full season.

Nottinghamshire blocked all their players from taking any part in last season's competition, while England batsman Matt Prior and all-rounder Ravi Bopara both went unsold for the second year in a row.

Last season's IPL ran from 3 April to 26 May, but next year's may start slightly later because the final of the World Twenty20 in Bangladesh is not until 6 April.