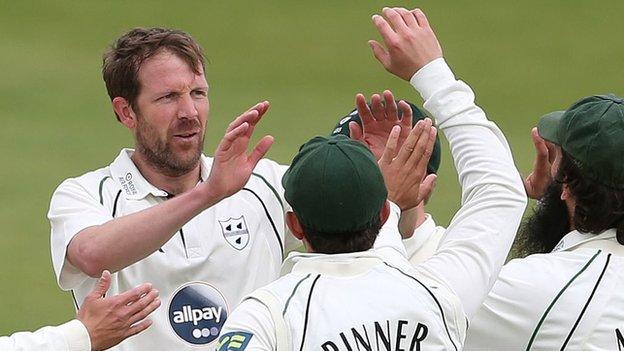 But his county coach Steve Rhodes has revealed that 38-year-old Richardson's 63 wickets this season have come in spite of a painful ankle injury.

"He's the type you want alongside you in the trenches," said Rhodes.

Richardson in the Championship

"He's played all season again with an ankle impingement problem that would have stopped a lot of people."

Newcastle-under-Lyme-born Richardson has in the past suffered more than his fair share of injury problems.

After his initial foray into the first-class game with Derbyshire in 1995, his long career began in earnest with Warwickshire in 1999, following three seasons playing Minor Counties cricket with his native Staffordshire.

He took 163 first-class wickets in 63 matches in his six years at Edgbaston before proving slightly less active, but slightly more productive, in claiming 142 scalps in 43 games in his five seasons with Middlesex.

But his four summers at New Road have so far brought him 248 in 59 matches, since signing for the 2010 season.

With one more game of the current campaign still to go (although a lot of his rivals have two matches left), he is still the leading County Championship wicket-taker in the country, having improved both his career-best and his best match analysis in the space of five days back in May.

Admittedly, he has been matched at New Road this summer on the individual heroics front by Moeen Ali.

Moeen's 1,331 runs at New Road this summer make him the country's highest Championship run-scorer to put him in line for a £10,000 pay-out for winning this year's Most Valuable Player award.

But Richardson is still the county's stand-out performer and to be averaging over four wickets per game over four years at New Road, while lowering his overall bowling average in the process, is impressive consistency.

"We'd be lost without him, I don't mind saying that," Rhodes told BBC Hereford & Worcester.

"He gets grumpier every year he plays but we can put up with that because what a wonderful servant he's been to Worcestershire.

"It's the measure of his determination and his character, that he still shows the same desire to bowl his overs, take his wickets and carry on the good work."