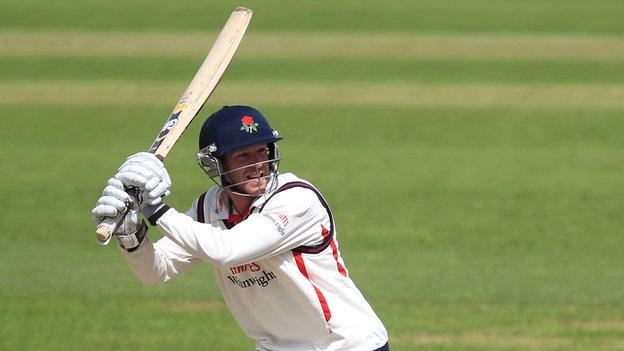 Luke Procter made his maiden century as promoted Lancashire batted all day against Gloucestershire at Bristol.

Resuming on 33-2 after a rain-ravaged first day, the visitors briefly looked in potential trouble on 105-4.

But Procter put on a stand of 179 for the fifth wicket with Tom Smith, who went on to finish the day on 88.

Lancashire, needing to win to seal the Division Two title, closed on 292-7, Will Gidman (4-58) proving the home side's most successful bowler.

Lancashire need nine further points from this game to clinch the Division Two title, although that figure will drop if second-placed Northants, who have already missed out on maximum bowling points, fall short on batting points too.

"Luke Procter's maiden first-class century was the highlight of yet another good day for the Division Two leaders.

"Procter, who has hit seven half-centuries this season, and Tom Smith battered through the afternoon session.

"On a pitch which looks difficult to score on, this feels like a good score already as Lancashire try and clinch the Division Two title this week."