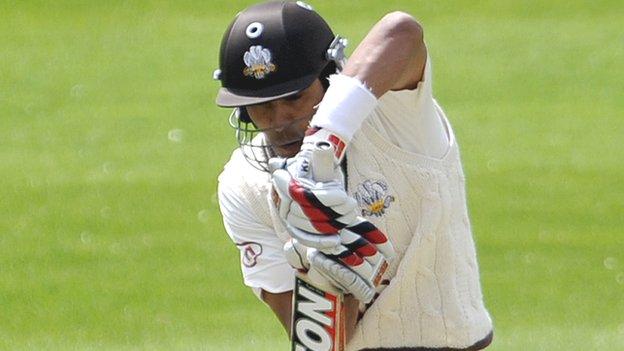 Vikram Solanki hit a masterful 162 at Edgbaston to offer Surrey a chance of escaping the drop to Division Two.

Stands of 166 for the third wicket with Hashim Amla (77) and then 182 with fellow Worcestershire old boy Steven Davies enabled Surrey to pile up 400-5.

Davies also went on to complete his century, going late on for 103.

With Notts looking likely to lose, Surrey now know that, by beating the Bears, they could climb within eight points of safety, with a game left.

They would then still have to beat Yorkshire at The Oval in next week's final round of fixtures.

But, with sixth-placed Somerset and seventh-placed Notts playing each other next week, a second straight Surrey win would be enough to survive, meaning that their fate is still in their own hands.

For Solanki, a return to familiar soil in the Midlands for the Wolverhampton-raised batsman proved an inspiration.

His 33rd first-class cricket century was his fourth in the Championship at Edgbaston, where he also produced a stunning, match-winning 126 for former club Worcestershire against the Bears in the semi-final of the 2004 C&G Trophy.

"It's been a very good day. We've done all we can today to get ourselves in a position to, not dictate terms, but certainly force the issue.

"Initially, the two guys that are in have got to try and get themselves in, and fortunately Hashim and myself were able to do that.

"Unfortunately Hashim got out, but to then get a substantial partnership straight after is exactly what you need.

"Up until now, there's been no question we've been a bit below par as a batting group, but as far as today's concerned, we couldn't have done more."