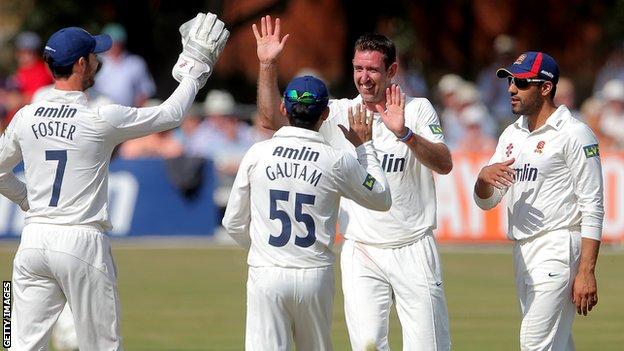 But the hosts still have it all to do in order to force the vital win needed to keep alive their hopes of closing the gap on second-placed Northants.

Murray Goodwin (65) and Chris Cooke (67) were the main source of Essex's frustration as Glamorgan made 322.

Essex need the victory at Chelmsford, and a Northants loss against Kent, to have any real hope of playing in the top tier next season alongside already-promoted Lancashire, having started this round of games 21 points behind the second-placed side.

Masters' 28th first-class five-wicket haul was confirmed when he had Andrew Salter caught by Owais Shah for a 71-ball nine, which took almost an hour and a half.

And those minutes could prove costly for Essex, having already lost much of the first day to rain.