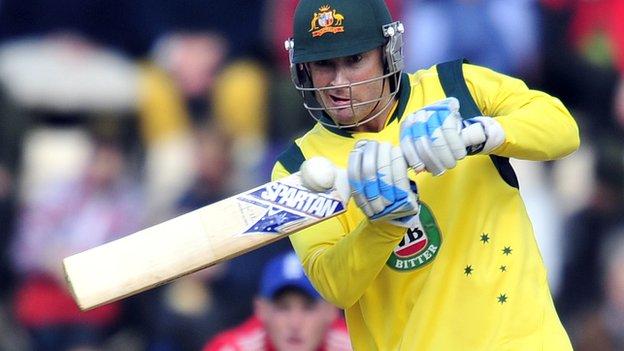 Australia captain Michael Clarke has been named in the squad for next month's seven-match one-day series in India despite a back problem.

Clarke has suffered chronic back pain for much of his career and missed the Champions Trophy in June when it flared up soon after arriving in England.

The 32-year-old will have scans after arriving back in Sydney on Wednesday.

"He will go home and get scans and then if he is not 100% fit we have to wait and see," said coach Darren Lehmann.

The series in India begins with the T20 international on 10 October and concludes on 2 November - 19 days before the start of the second Ashes of 2013.

Having finished bottom of their Champions Trophy group in England this June, Australia were then beaten 3-0 in the Ashes - their third straight defeat in cricket's oldest Test series.

Clarke led by example during the Ashes, though, scoring 381 runs in 10 innings at an average of 47.62, with a highest score of 187 in the third Test at Old Trafford.

He struck another century at the Manchester venue as Australia took the lead in the one-day international series which followed.

The back injury flared up again ahead of the series decider at Southampton on Monday, but Clarke was passed fit and stroked a fluent 75 from 76 balls as the tourists won by 49 runs to wrap up a 2-1 victory.

"On Monday he said he was fit to go and you take his word on that. We'll get back home and check it with the medics and see how he goes from there," Lehmann said.

"He has had it for a long time. I am pretty pleased he got through the series, albeit very lucky to play on Monday, but he played and led well."

National selector John Inverarity said: "After a long tour Michael Clarke's back condition has flared up again and he has been selected subject to fitness.

"The NSP [National Selection Panel] hopes that it will improve in time for the Indian tour."

Reflecting on the tour of England, Lehmann said: "We know we have got to improve in some areas - especially with the bat.

"The way we played - especially in the last three Tests - we were very, very good except for two hours in Durham [when Australia, chasing 299 for victory, collapsed from 147-1 to 224 all out]. We just need to be consistent and grab the big moments and we know that.

"I am really pleased with the way they played throughout the one-day tournament, even though we had a few rain-affected games, but I thought we played pretty well."