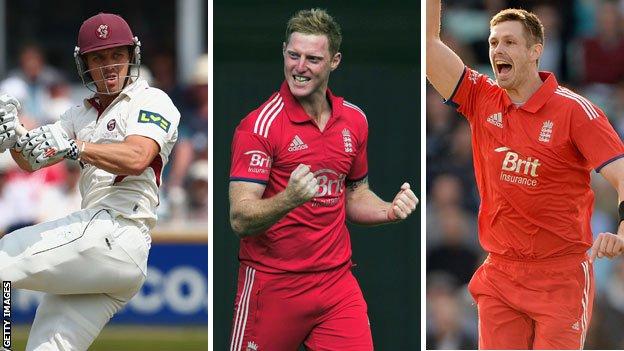 This week I've put my selector's hat on and picked my England Ashes squad ahead of the official announcement on Monday.

As ever, I started by writing down the dead certs - the established members of the Test set-up who are guaranteed a seat on the plane.

To my mind, there are 10 players who fit into this category: Alastair Cook, Joe Root, Jonathan Trott, Kevin Pietersen, Ian Bell, Matt Prior, Stuart Broad, Graeme Swann, James Anderson and Tim Bresnan, provided he makes a full recovery from his back injury.

That left seven places to fill in England's 17-man party. Here, I've looked at some of the contenders in each area of the side and named my men for down under.

I found this decision hardest of all because all five of these batsmen have had good seasons and could offer something different to England.

However, I wanted someone with enough experience at the top of the order to be able to come in if any of England's top three were injured on the morning of a Test match.

That left me with a straight choice between Compton and Carberry, both of whom bat in the top three for their county.

Nick Compton gets the final nod on the strength of his impressive displays in away Test series in India and New Zealand last winter and the confident batting I witnessed when Somerset beat Surrey last week.

I've been a huge admirer of Carberry for some time, but for various reasons - including the weather and a calamitous run-out - he didn't quite do enough in the one-day series against Australia to nail down a place on the tour.

Matt Prior will wear the gloves again for the return Ashes series, but England need a ready-made replacement who can hold his own as a batsman and wicketkeeper.

Buttler had an excellent one-day series for England with bat and gloves and is pushing strongly for promotion to the Test set-up.

But neither he nor Steve Davies has quite done enough this season to warrant a place ahead of Jonny Bairstow.

The Yorkshireman had an indifferent home Ashes series with the bat, and was dropped for the final Test, but he will be stronger for the experience and deserves to hold on to his place in the squad.

This was a straight fight between two bright young talents, but Ben Stokes wins it for me because of his superior batting.

The Durham man was sent home from an England Lions tour earlier this year for disciplinary reasons but appears to have matured and is a rapidly improving young cricketer.

He is a batting all-rounder who could challenge Bairstow for the number six position and provide Cook with a fourth seam-bowling option.

The 22-year-old had a good one-day series against Australia, taking a five-wicket haul in Southampton, and certainly didn't look out of his depth at international level.

Monty Panesar is the second best spinner in England by some distance and would definitely be in my Ashes party provided he can prove his off-field problems are behind him.

I imagine the selectors will be seeking feedback on Panesar from his new county Essex, but unless there are major concerns over his state of mind they will want him on the plane.

Of the other contenders, Tredwell hasn't really done it for Kent in four-day cricket this season, while Kerrigan had a difficult debut at The Oval and will probably be included in the performance squad to continue his development.

England have considerable strength in depth in the pace-bowling department, and one or two cricketers will be very unlucky to miss out on Monday.

In my squad, I'm going for Chris Tremlett, who was such a force down under two years ago, especially with his ability to reverse swing the old ball.

I'm also picking Boyd Rankin as a bit of a wild card. Allied to his pace and height, he also has great control and has strung some excellent performances together in the recent one-day series.

In Warwickshire they speak about him in glowing terms and he is peaking at the right time to suggest he could be a real force this winter.

Although he has struggled for consistency this summer, Steven Finn also makes the cut because of his proven track record and potential threat on the fast, bouncy Australian pitches.

Graham Onions has been the best domestic bowler all season but has fallen slightly down the pecking order after being overlooked by England all summer.

He should be in the performance squad in Australia, ready to cover for the injuries that are inevitable on a tour of this length.

NB - When the Ashes party was announced on Monday, 15 of Alec's selections made the squad - the exceptions being Nick Compton and Tim Bresnan, while Michael Carberry and Gary Ballance were selected instead.