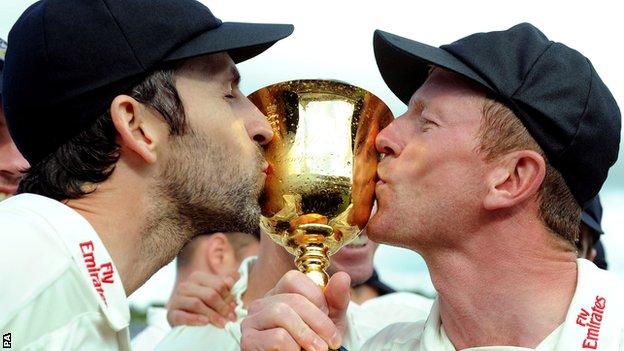 Durham lifted the County Championship trophy after an eight-wicket win over Nottinghamshire at Chester-le-Street.

Harry Gurney picked up two wickets, but Stoneman saw them home in the 17th over to finish on 35 not out.

The win was Durham's fifth in a row and 10th of the season - four more than when they lifted the Championship trophy for the first time in 2008 and two more than when they retained the title 12 months later - and ensured they could not be caught by rivals Yorkshire.

Few predicted this Durham side would be among the contenders for the title at the start of the campaign following the retirement of Michael Di Venuto and Ian Blackwell and departure of Liam Plunkett, as well as the club's decision not to employ an overseas player.

They began the campaign with a 2.5-point penalty for breaking salary cap regulations and lost experienced Dale Benkenstein in mid-season because of a shoulder problem.

This was a magnificent win by Durham, as so many of them have been this season.

The campaign began with the club going cap in hand to the county council for financial help. I don't have enough fingers to count how many national newspaper and website writers wrote them off.

In early August they were easily beaten at Lord's by Middlesex and captain Paul Collingwood had to issue a 'don't panic' warning.

The team pressed on and with the dressing room galvanised, Durham have been simply breathtaking over the last five weeks.

They have now won a club record five games in a row and could become the first side to win 11 in a season since the two-division split in 2000.

You can single out many players for praise, but ultimately it has been a team effort and every one of them deserves to celebrate this one to the full.

Their backroom staff had to be reorganised when head coach Geoff Cook suffered a heart attack, but a team largely harnessed from academy talent has made a huge impression under captain Paul Collingwood, who led England to the World T20 title in 2010.

"It's been a tough year off the pitch with all the adversity that we've been through, with Geoff's illness and a lot of different issues," said Collingwood.

"The guys have really stood up at the right times and to see so many local youngsters scoring big runs, taking five-fors and winning games for Durham has been very satisfying from a captain's point of view - to watch them blossom and grow into men.

"It's great for the future, in many ways we have had our hands tied with the financial constraints and not being able to bring in overseas players, but it has been a blessing in disguise. These guys have had to improve their cricket and improve it very quickly."

Durham were in charge against Notts after bowling them out for just 78 on the opening day, although they were in trouble at 45-5 in their own first innings before recovering to post a total of 256.

Collingwood (88 not out) and Phil Mustard (77), Durham's two most experienced players, rescued the situation with a partnership of 121.

Notts showed greater resolve in their second innings, but a score of 246 left a target of only 69 for the home side, reduced by seven as the hosts faced one over on Wednesday evening.

No play was possible on a soggy, gloomy morning, but the skies cleared and play finally began over two hours late.

Once the covers were removed, Durham were disciplined at the crease as Stoneman and Keaton Jennings were content to pick up only occasional boundaries against accurate bowling.

Gurney delayed the celebrations when he accounted for Jennings and Scott Borthwick inside two overs - the former lbw for 21 and Borthwick caught for a fourth-ball duck.

Will Smith came in at number four against his former employers, but he was largely a spectator as Stoneman thumped the ball to the boundary for the runs that brought the game to an end.

Notts now have an extra day to prepare for Saturday's YB40 final against Glamorgan at Lord's.

However, defeat at Chester-le-Street leaves them still not safe from relegation.

If they lose next week's home game against Somerset and Derbyshire defeat 2012 champions Warwickshire, they could find themselves playing in Division Two next summer.