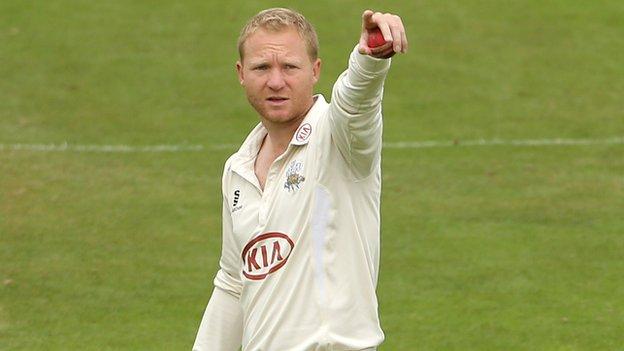 Surrey skipper Gareth Batty made a bold declaration gamble against Warwickshire in a bid to force the win they need to keep any Division One survival hopes.

Batty declared on Surrey's overnight score of 400-5 before play finally got underway in mid-afternoon,

The Bears fed on a diet of declaration bowling to make 120-0 off 22 overs.

They then declared, Surrey forfeited their second innings and Warwickshire reached 55-2 at the close, still needing a further 226 runs to win.

Bears bare behind the stumps

After looking in no trouble on their first visit to the crease of the afternoon, Varun Chopra making 69 not out, while Ian Westwood weighed in with an unbeaten 42, it proved a different story second time around.

Chris Tremlett removed Chopra for a 14-ball duck before Stuart Meeker had Westwood caught behind to leave the Bears in trouble on 19-2 - and Batty's plan suddenly looked a winner.

Bottom club Surrey began this game on 103 points, 29 points adrift of safety, with just one more game to come after this one - at home next week to a Yorkshire side maybe now on the rebound following their failure to win the title.

With sixth-placed Somerset and seventh-placed Notts playing each other next week, a second straight Surrey win, with maximum bonus points, would be enough to survive, meaning that their fate is still in their own hands.

But first they have to take eight wickets on the final day at Edgbaston.

If they fail to win, they will be relegated, which is the explanation for Worcestershire old boy Batty's generous, pre-agreed declaration, setting the Bears 281 to win.

But county champions Warwickshire, currently fifth, could still be in the prize money if they finish in the top four, thereby giving Bears stand-in skipper Chopra the incentive to 'play ball' with Batty.

"Warwickshire acting captain Varun Chopra has taken advantage of being in a strong bargaining position. As he put it 'Surrey need to win, we'd like to win. That's the difference.'

"On the face of it, the target of 281 with plenty of time left to get them looks generous on what's a decent batting track. The loss of both openers has put Warwickshire under a bit of pressure and they do have an inexperienced lower order if we get that far. That includes debutant wicket-keeper Jamie Atkinson, who will bat if necessary despite suffering a cracked finger.

"Nevertheless, Warwickshire should fancy their chances of getting the win that will keep them in with a chance of finishing in the top four prize money places."

"The equation for Surrey is now very simple. Take eight Warwickshire wickets tomorrow, win the game and take their relegation fight into the final week of the season. Fail to do that and they will drop into Division Two.

"Warwickshire closed on 55-2 after Surrey had forfeited their second innings to give themselves a chance of bowling the hosts out and picking up 16 points for the victory.

"It all boils down to tomorrow for Surrey. It really is that simple."