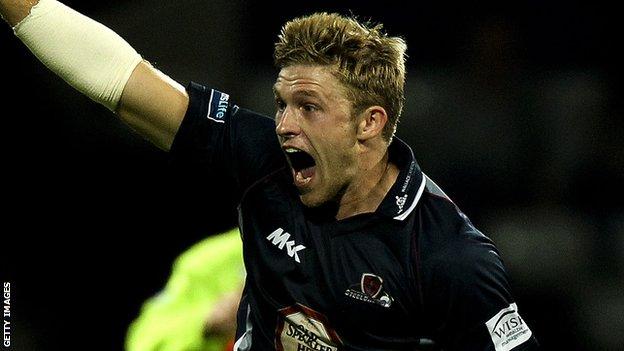 The 23-year-old scored 60 off 27 balls and finished the game with a hat-trick as the county beat Surrey to claim their first FLt20 title this season.

"It's been a good year for me and I'd be lying if I said there weren't a few people knocking on my door.

"But I'm a Northampton lad through and through. The club has made some massive development in the last 12 months," Willey told BBC Radio Northampton.

"They are a great bunch of lads and I'm really looking forward to what the future brings with Northants.

"I had an alright season last year and I worked on my game and the physical side, but the best place to learn is out there in the middle."

Willey earned an England Lions call-up earlier this summer and admitted that joining a different county might have boosted his chances of further honours at international level.

"It's something I've had to weigh up. There seems to be a theme you have to be playing Division One cricket and at a Test ground.

"But the approach I've taken is that if I'm good enough to play international cricket then I'll hopefully get picked. We'll have to wait and see," he said.

Willey, the son of former England batsman Peter, is currently sidelined with a back injury, but is hopeful that he will be able to play in their final Championship match next week, when they have a chance to clinch promotion.

"I've made some slow progress over last few weeks, but I'm still unsure what the problem is, which is a bit of a nuisance," he added.

"I hope I can make some progression and I can get out there. If not, there's plenty of guys at the club who are more than capable of doing my job as well. Hopefully we van get across the line."