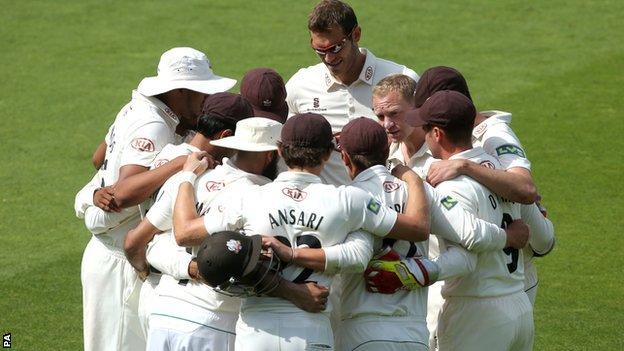 Surrey suffered relegation back to Division Two of the County Championship after their bold declaration gamble failed to pay off at Edgbaston.

Needing to win to stand any hope of staying up, Surrey captain Gareth Batty struck a deal with Warwickshire stand-in skipper Varun Chopra.

But, asked to chase only 281 to win in four sessions, the Bears got home in some comfort after resuming on 55-2.

The pair shared an unbroken partnership of 155 for the fifth wicket after the morning departure of Surrey old boys Laurie Evans (34) and Rikki Clarke (17) had briefly offered hope of the away win the visitors needed to keep their survival hopes alive.

Warwickshire's 17 points from the match meant that last season's champions will go into next week's final round of fixtures still with a chance of finishing third.

But with the end coming at Edgbaston for Surrey, relegation will be a particularly painful blow for Batty, Solanki and wicketkeeper Steven Davies, who all used to play for neighbouring Worcestershire and now face the prospect of having to return to New Road to play Division Two cricket next summer.

After being relegated for the first time in 2008, Surrey were then promoted back to the top flight in 2011 - but have only managed two seasons back in Division One.

The 2013 campaign started with such promise at The Oval after the signings of Vikram Solanki from Worcestershjre and Lancashire's County Championship-winning spinner Gary Keedy, further supplemented by the exciting winter recruitment of South African Test captain Graeme Smith and Australian legend Ricky Ponting.

But Smith lasted just three Championship matches before succumbing to an ankle injury and not even the late-season signing of his South African team-mate Hashim Amla could save the Brown Caps.

By then, Surrey had parted company with team director Chris Adams, who was replaced by Surrey legend Alec Stewart in midsummer, but it has not gone to plan for the former England skipper either.

Stewart and Surrey are yet to announce their plans for next season, but it was reported on Friday that South African Graeme Ford, the former Kent coach, has reiterated his intention to step down as Sri Lanka coach when his contract expires in January.

The 52-year-old, is a reported Surrey target, and has ties with Surrey captain Smith, who is due to return in 2014, after coaching him while in charge of South Africa.

"You get what you deserve and that is relegation. Nobody has a divine right to play in the top division.

"We had to wait until our 12th game of the season to win our first game and that's not good enough. But we have to take in on the chin.

"Warwickshire played outstandingly well, but this was only a second day pitch. We had to gamble. They held all the cards and we couldn't get the breakthrough.

"Over the winter, we'd now like to see some improvements made that will help us challenge next year to win promotion."

"Last night it was a bit tricky with the new ball, and then first thing this morning too, but I got myself in, we got through to lunch and it helped batting with Woakesie.

"It has been great to be given my chance this season but these are the sort of moments you put in all the hard work for and I've got more confident as the season's gone on.

"And it was a great compliment to have Hashim Amla, the world's number one batsman, come up to me and tell me how well I'd played."

"Bitter disappointment for Surrey as they drop into the Second Division of the Championship.

"Even though they gave themselves a chance of winning this game and keeping their season alive until next week the table does not lie.

"Just one win meant that Surrey were always under pressure to force a result at Edgbaston and Ateeq Javid batted extremely well to guide the hosts to victory."