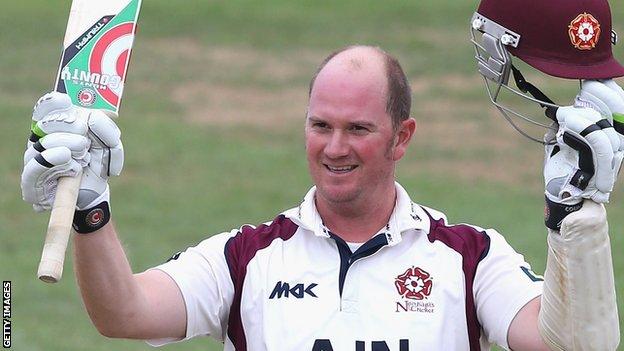 David Sales and James Middlebrook hit centuries as Northants claimed maximum batting points against Kent to leave themselves on the brink of promotion.

With so much time lost to rain, the game ended in an inevitable draw when Northants declared on 431-5.

But they only need five points from next week's game against Worcestershire to go up to Division One.

Seamer Charlie Shreck was Kent's most successful bowler with 2-80, having Sales caught behind to end a third-wicket stand of 111 with Alex Wakely (55), who he later trapped lbw.

Andrew Hall weighed in with 35 and Rob Keogh was not out on 32 when the two sides called a halt.

"That this ended in a draw was no surprise with four centurions in the match and the loss of so much time to the weather.

"The final day centred on Northants' drive for maximum batting points and once that had been achieved, then the game was over as a contest.

"Rob Key bowled the final four deliveries of the game but couldn't add to his first-class wicket tally, which remains on three."