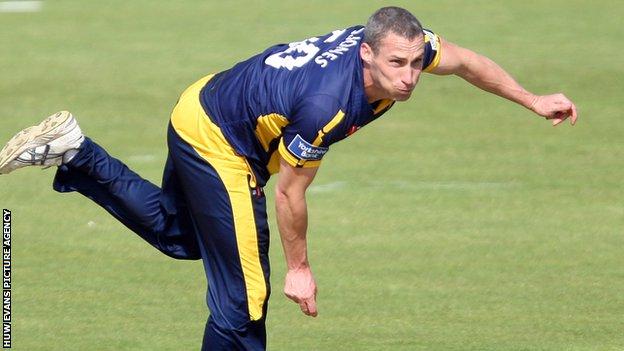 Ex-England bowler Simon Jones believes Glamorgan can shake off the tag of underdogs to beat Nottinghamshire in the YB40 final at Lord's on Saturday.

The 2005 Ashes winner is confident as he prepares to play the final 40-over game of his career.

Jones, 34, is retiring from all first-class and List A cricket at the end of the 2013 season.

"This is our year I feel. I'm really confident the way the changing room is," said Jones.

"The boys are happy - they all know their roles in the side.

"It reminds me a little bit of when I was in the England team, everyone is relaxed and the changing room is settled.

"We are going into the game nice and confident and looking forward to enjoying the occasion."

But Jones knows that Nottinghamshire, who could include England pair Stuart Broad and Graeme Swann, will be strong favourites to lift the trophy.

That despite Glamorgan overcoming defending champions Hampshire in the semi-final by 31 runs to reach their first Lord's final for 13 years.

"I think whoever we played we would have been underdogs. It's just the nature of the beast," admitted Jones.

"Glamorgan have been known as the whipping boys for the last five or six years, but we have played some good cricket.

"We have had a couple of tough years. People have been critical of us but rightly so.

"[Now] we are going into the game nice and confident and looking forward to enjoying the occasion.

"People should soak in the atmosphere rather than worry about it. It [Lord's] is an amazing place to play cricket."

Jones, who made his debut for Glamorgan in 1998 and played 18 Test matches for England, says he will try to keep his emotions under control as he plays his final 40-over game.

"There's obviously going to be emotion but it's one of things you have to control," he said.

After the final Jones will be meeting with Hugh Morris, Glamorgan's director of cricket-elect, to discuss a possible Twenty20 contract.

Jones added: "Hopefully I can do well in the final and I can persuade him to give me another contract."