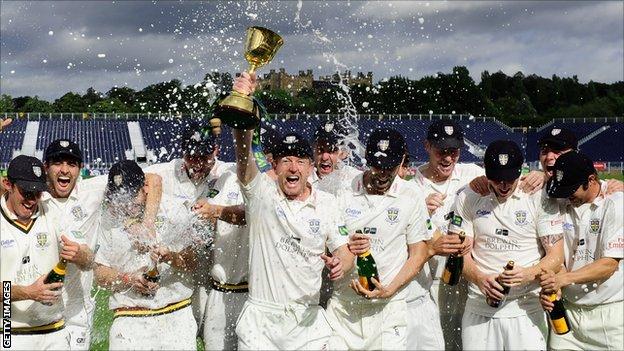 The class of 2013 wrote their own chapter in the county's fledgling history - and built on the successes of 2008 and 2009 - with an eight-wicket win against Nottinghamshire.

Few would have backed them to feature among the frontrunners at the start of the campaign following a winter of change at Chester-le-Street, but 10 wins from 15 games propelled the most northerly of first-class counties to the title at the expense of rivals Yorkshire.

BBC Sport has spoken to three of the heroes of Durham's triumph - coaches Geoff Cook, Jon Lewis and captain Paul Collingwood - to assess how the championship was won.

Paul Collingwood took over the captaincy at Durham towards the end of last season, and led the county to five wins and a draw from the last six matches to alleviate any fears of the drop. The former England one-day skipper has brought all his international experience and nous to the county circuit, inspiring the crop of 2013 to success.

They've been superbly captained by Paul Collingwood, he's been inspirational, without wanting to use a word that's overused. He's been excellent in bringing a calmness and competitiveness to the team

Jon Lewis: "The bond and the feeling with the lads is a very strong one and Paul deserves a lot of credit for that. He's focused on engendering a very positive atmosphere in the dressing room.

"He's aware that we've got some young guys in the side who maybe won't deal with the knocks quite as well yet as they will in a few years time. Because he's very patient with them when we do have tough days and tough sessions he makes sure they don't lose belief with themselves and, as I say, he is very, very positive."

Geoff Cook: "They've been superbly captained by Paul Collingwood, he's been inspirational, without wanting to use a word that's overused. He's been excellent in bringing a calmness and competitiveness to the team.

"I'm not sure how he was finding the initial half of last year when the team was struggling as the players were all at different stages of their career. Then a change in captaincy was needed, Paul was asked to do the job and I think he was delighted and it has given him the impetus to recharge his batteries."

All three of Durham's title-winning sides have been built on a prolific set of bowlers, from the pace and bounce of Callum Thorp and Steve Harmison in 2008 and 2009, to the un-erring accuracy of Graham Onions and Chris Rushworth in 2013. Onions contributed 66 wickets and Rushworth 53, while Ben Stokes' 40, Mark Wood's 27 and Scott Borthwick's 25 added to a varied presence.

Paul Collingwood: "The bowlers have been magnificent all year, they keep taking 20 wickets every game. We somehow keep on bringing young bowlers through all the time and they're all pushing for international status.

"Graham Onions has been superb, and the guy who doesn't get plaudits all the time is Chris Rushworth. No matter what form of game he has been absolutely superb, and has taken over 50 wickets in the four-day stuff, which has gone a long way to helping us win this championship."

GC: "It's been a fairly rapid evolvement, from having the likes of Liam Plunkett, Harmison and Thorp, who were a very potent group of players, to young guys coming in like Harrison, Wood and Rushworth. They're formidable - especially here at Chester-le-Street, where it does help the seamers, and they combine excellently.

"I admire people who perhaps recognise where things went wrong initially, and Rushworth had the opportunity to come back and have a second crack at being a professional cricketer. He's taken that brilliantly. He's been central to everything for Durham in all forms of cricket."

JL: "Rushworth has been exceptional. It goes back to the beginning of last winter. He had a decent summer last year and had a decision to make - if he really cranked up the work he could have a big summer [in 2013].

"He worked his nut off, his physical work was excellent and that's what kept him on the field. He's probably taken the new ball more than anyone else for the county this season. Every day, one-day games, whatever, Rushy's there."

Losing coach Geoff Cook for two months after a heart attack was a major blow for Durham, but under Jon Lewis, Neil Killeen and Alan Walker's stewardship the team were able to maintain their championship title bid.

Cook on surviving a heart attack

"It was an unscheduled mid-season break. I was jogging round the Chester-le-Street riverside and the next thing I knew I woke up in hospital," Durham coach Geoff Cook told BBC Radio 5 Live.

"Someone was jogging behind me - he must have been going really slowly - and they found me, tried to bring me round and called for the ambulance.

"The doctors, who were fantastic, said it was a freak accident. I'm absolutely fine now and have a little mechanism attached inside me.

"There was no damage to the heart, so I was very fortunate."

The shoulder injury to Dale Benkenstein was another set-back, but the depth to the squad, built around a productive academy set-up, provided crucial options for the coaching staff. Finances also dictated squad matters, with no overseas imports for first-class, List A or Twenty20 cricket in 2013.

JL: "We have had to play players like Usman Arshad, Mark Wood had to play half the season, Jamie Harrison is more established in the side, Michael Richardson is also more established, Ryan Buckley, Ryan Pringle - these players are going to have to take on a serious mantle."

PC: "It's been a tough year off the pitch with all the adversity that we've been through, with Geoff's illness and a lot of different issues. It was horrible news in June when Geoff went down with the heart attack, it wasn't nice going to see him when it looked like he was on his death bed, but look at him now - he is back and has responded.

"When you lose people, others have to put their hand up. The players wanted to do it for Geoff. It's a third year out of 21 [that Durham have won the title], which is a great record.

"The guys have really stood up at the right times of the year and to see so many youngsters, local youngsters, scoring big runs and scoring five-fors and winning games - it's been very satisfying from a captain's point of view to watch them blossom and grow into men."

Borthwick's emergence as a top-order batsman

Sunderland-born leg spinner Scott Borthwick has been on England's radar for a good while, having spent time in one-day and Lions squads for his bowling prowess.

However, the paucity of spinner's tracks on the English county circuit, plus the loss of top-order batsmen such as Michael Di Venuto and Dale Benkenstein, saw the 23-year-old switched from eight to three, with Michael Richardson moving the other way. The switch has paid off, as Borthwick is ninth in the Most Valuable Player rankings and has scored 985 first-class runs, to add to 25 wickets, in 2013 with one game remaining.

PC: "The batters somehow find a way to get more runs than the opposition, which is the whole point of cricket, but for Mark Stoneman and Scott Borthwick to score 1,000 in the season - a special mention goes to them, especially at the Riverside. It has been a great, great achievement."

JL: "Early season pitches don't favour leg-spinners and Scott is a real crucial part of the side, not just as a bowler but also his catching, late-order runs and the energy and spirit that he brings.

"We wanted to keep him in the side but it was also difficult that we also wanted to get that extra seamer on as well, because the early season wickets were needing that. It was a bit of a punt and I don't think we expected him to kick on as he has, because he has done magnificently."

It's brilliant for the north east. It shows how strong the club culture is up here, how strong the academy is here at Durham, and we're doing a lot of things right

The presence of Collingwood, Onions and Benkenstein (prior to the latter's injury) has been mutually beneficial, and provides hope for the future amid further expected departures this winter.

PC: "It's brilliant for the north east. It shows how strong the club culture is up here, how strong the academy is here at Durham, and we're doing a lot of things right.

"We've still got a strong core of good, young players that are going to drive us on for the next 10 years and as long as we keep hold of them and as long as they have the ambition, which I am sure they will, this club will be safe and well."

JL: "We might be losing a few senior faces, which will be tough to deal with, but we've managed this year, without letting our performances drop, to bring on young players - in fact, we have increased our performances in some respect."