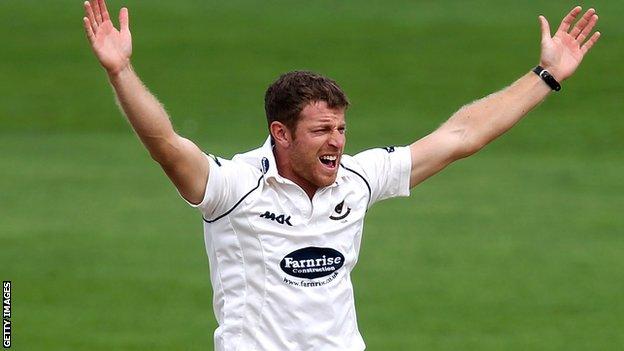 A dismal batting display from newly-crowned Champions Durham gave Sussex the initiative on day one at Hove.

But England one-day international Luke Wright (74 not out) saw Sussex into the lead to close 22 runs ahead on 186-5.

After missing out on a call-up to the England squad to tour Australia for this winter's Ashes, Onions helped ensure that Sussex could not build up any early momentum from the performance of their bowlers, and left them at 6-2 after dismissing both Chris Nash and Michael Yardy for ducks.

However, with their response faltering at 90-5, Wright and Ben Brown (18 not out) produced a 96-run partnership which was still unbroken at the close of play to put them in the driving seat.

There was some positive news for Durham, though, as local boys Scott Borthwick (36) and Mark Stoneman (20) both passed 1,000 Championship runs in a season for the first time despite their team's poor overall performance with the bat.