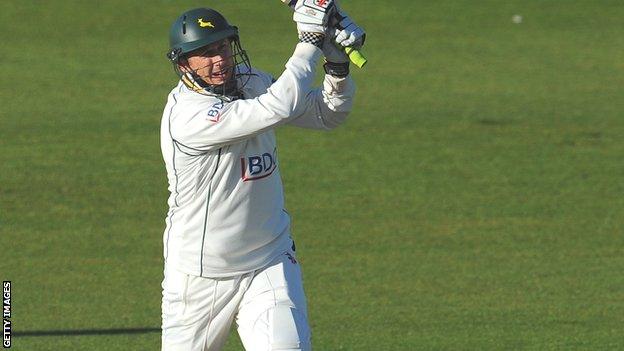 David Hussey and Michael Lumb both scored centuries as Nottinghamshire recovered from a shaky start against Somerset at Trent Bridge.

The visitors had reduced Notts to 76-4, with Lewis Gregory (3-89) dismissing Steven Mullaney (17) and James Taylor for a duck.

How it stands at the bottom

If Derbyshire go on to beat Warwickshire at home, the losers of this match could yet join bottom-club Surrey in being relegated to Division Two.

And, having won the toss and elected to field, it was Somerset who had the better of the morning session, with Riki Wessels, Mullaney, Samit Patel and Taylor, the latter two having missed out on places in England's Ashes squad on Monday, all falling cheaply.

But Hussey and Lumb came together to lead the Nottinghamshire fightback in a partnership spanning 54.4 overs, and frustrating Somerset to the extent that England Lions bowler Jamie Overton had to be removed from the attack by the umpires for excessive short-pitched bowling.

Hussey, whose innings lasted 172 deliveries and included 20 fours, was finally caught by Craig Kieswetter off the bowling of Craig Meschede (2-67), having twice been dropped previously, before Lumb, who passed 1,000 Championship runs for the season in compiling his century, was trapped in front by Gregory after putting on 51 with Read.

Meschede had the Notts captain and wicketkeeper caught behind 12 balls before stumps with the hosts 22 runs shy of a fifth batting point.

"David Hussey admitted he was taken aback and became a little bit emotional as he was given a standing ovation at the end of what could be his farewell innings at Trent Bridge.

"The Australian has been a great servant to Notts since arriving in 2004 and it meant so much to him to deliver an important knock with the spectre of relegation not too far away.

"Hussey's stand of 214 with Michael Lumb, who notched up his own fourth ton of the season, has gone a long way to ensuring survival."