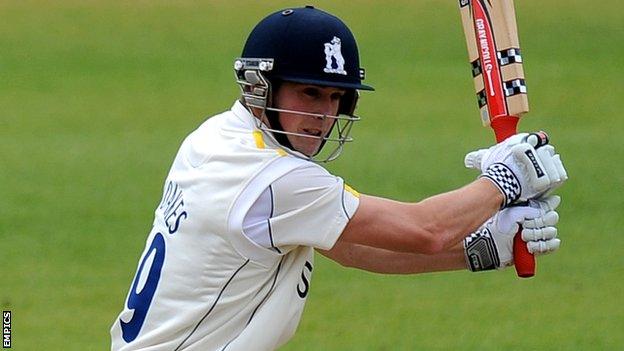 Chris Woakes responded to being overlooked by the England selectors with a battling century to rescue Warwickshire at Derby.

He was well supported by Jeetan Patel (42) in a 69-run eighth-wicket stand, while earlier, Ateeq Javid made 46.

However, Woakes, left out of England's Ashes tour party for Australia and also this winter's Performance Programme squad, was the star of the show, getting his head down to bat for more than four hours, hitting just 11 boundaries in his 195-ball knock.

Having been asked to bat by Derbyshire, who must win to have a chance of staying up, Warwickshire lunched on 88-3, but it was after the interval when Groenewald did most of his damage.

After Rikki Clarke fell to Tony Palladino for 22, he struck twice, dismissing both Javid, who had earlier been dropped twice by Tom Poynton, and debutant Stuart Poynter, the Bears' sixth wicket-keeper in a month, in the same over.

Keith Barker was then caught by Poynton off the impressive Groenewald before Woakes, part of England's final Test line-up at The Oval just a month ago, and Patel saw the visitors through to tea,

And, although Patel went before the close, on-loan Maurice Chambers came in to help earn a second batting point for the Bears, who could still finish third if they win, to Derbyshire's intense frustration.

"Warwickshire ended the first day with ambitions of finishing third in the table still very much alive while Derbyshire's hopes of avoiding relegation, while not gone, look more remote.

"It was a brilliant innings from Chris Woakes, who looked untroubled, apart from being dropped when in the 80s. He showed the best response to being left out of an England squad may not be turning to social media sites to make your feelings known, but rather to show what your country may miss out in the middle.

"Yet again Warwickshire's lower order has proven invaluable with the score more then doubled from six wickets down."