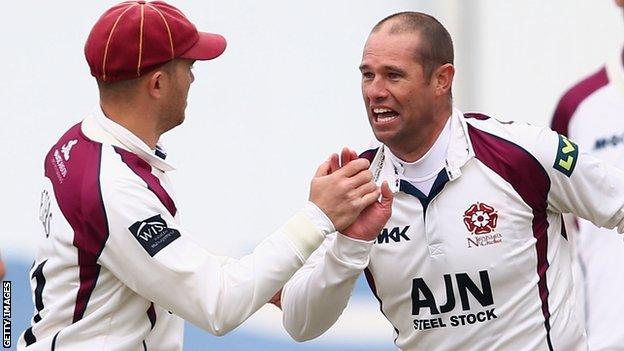 Andrew Hall took 5-30 as Northants bowled out Worcestershire for 163 at New Road to leave themselves needing only two points to secure promotion.

Left-armer David Willey dismissed Daryl Mitchell and Moeen Ali for ducks in the opening over of the game.

And, apart from Jack Shantry (55 not out) and Matt Pardoe (51), only one other batsman reached double figures.

Hall finished off the tail, but Northants also made a poor start in reply and were 103-4 at the close.

The second-placed visitors took a 20-point lead over Essex into the game and with clouds overhead, skipper Stephen Peters did not hesitate to put Worcestershire in after winning the toss.

Willey, returning to the Northants side after injury, won lbw decisions against Mitchell and Moeen with his second and fourth deliveries and there was a steady procession to and from the dressing room as the home side slumped to 76-7.

Opening batsman Pardoe was resolute as partners came and went, but Shantry opted for a positive approach as they added 72.

Shantry remained unbeaten as Hall, who had earlier claimed his 600th first-class wicket removed Chris Russell and Alan Richardson with successive balls to end the innings and secure a third bonus point against the side who were his first county employers.

Northants began their reply with the initial target of scoring 250 for the two extra points they need, but James Middlebrook soon fell to Shantry and veteran Richardson took 2-34 to leave them with work to do on day two to make sure of a return to Division One for the first time since 2004.

"Northants made excellent use of the early morning conditions, with Andrew Hall returning to his old club to cash in on David Willey's early thrust.

"Matthew Pardoe, in his first full season as an opener, again showed some spirit and with the help of Shantry's improving batting, saved Worcestershire from registering their lowest score of the season.

"Alan Richardson's 250th wicket in four seasons for the club was reward for another summer of toil, but Northants bat a long way down and look certain to clinch promotion on the second day."

"Northants took a giant step towards clinching promotion on an engrossing day in which 14 wickets fell.

"Bowling Worcestershire out for 163 was just what they wanted and although David Willey's two wickets in the opening over caught the eye, it was accurate Andrew Hall's 5-30 that tipped the balance against his former club.

"If Essex fail to take maximum bowling points against Hampshire, Northants will only need 200 to secure promotion, but whether whether it's 200 or 250, the party should begin around lunchtime on day two."