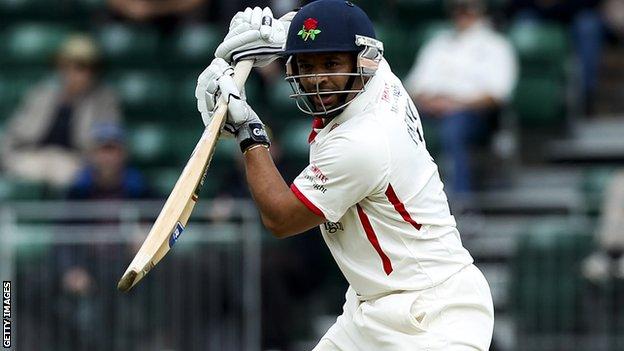 South African Ashwell Prince hit his second century of the season for Division Two champions Lancashire on a hard-fought opening day against Kent.

However, Karl Brown's 42 was the only other score above 20 as the visitors were restricted to 269-8 at stumps.

However, Mark Davies was the pick of the home attack with 2-34 from 19 overs, and his victims included Alex Davies for 16.

He also dismissed Paul Horton with the second ball of the match and left-hander Prince's third-wicket stand of 72 with Brown was the only substantial partnership put together by Lancashire.

Kent's fielding was not flawless, with a number of chances dropped, but they will hope to bat well when they begin their reply to boost their chances of becoming the first team to beat Lancashire in the Championship this season.

"Kent let Lancashire off the hook with as a series of dropped catches coming at pivotal moments, just when they could have moved into the ascendancy.

"Prince deservedly rode his luck through the tricky morning session, keeping a measured head when other Lancashire batsman were guilty of poor shot selection.

"With nothing riding on the game, the intensity was lacking at times, but on a wicket that keeps both sides honest, neither can claim to be on top."

"A day of landmarks for the brilliant Ashwell Prince, who passed 15,000 first-class runs after batting for almost the entire day.

"His unbeaten century was the highlight for Lancashire as no other batsman ever looked in on a pitch which seemed to offer assistance for the bowlers throughout the day.

"Dropped catches could prove costly for Kent and there were plenty of them. Any total over 300 will be challenge for them."