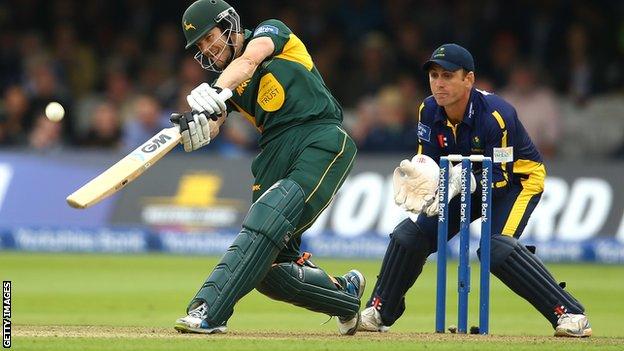 YB40 winners Nottinghamshire have been drawn in the same group as beaten finalists Glamorgan for next season's expanded 50-over tournament.

The pair are joined by seven other sides in Group A, including county champions Durham.

The 50-over tournament will bring an end to 40-over cricket in the UK, with 18 first-class counties split into two groups of nine for the new event.

With domestic one-day cricket moving in to line with the 50-over game played at international level, Saturday's YB40 final saw an end to the 40 -over cricket which began with the John Player League in 1969.

Whereas the 21-team YB40 included Scotland, the Netherlands and composite outfit Unicorns, the as yet unsponsored 50-over tournament contains only the 18 first-class sides.

Teams play each other once, with the top four from each group progressing to the quarter-finals.

Full draw for new List A competition in full: