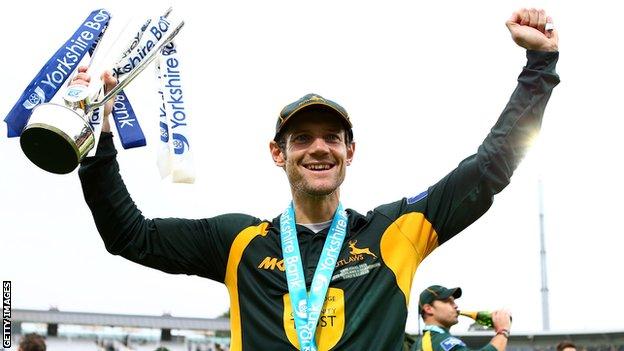 Flushed from their YB40 final win over Glamorgan, Read's side now go into their final match with Somerset knowing they can still go down to Division Two.

"And I hope that this euphoria and glory will give us the confidence we need for next week," he added.

"We're fighting for our Division One lives.

"We've had some decent performances in red-ball cricket this year.

"But, overall, we know we haven't played well enough and it would be good if we can build on this feeling here and put in one big performance when it matters most."

The club have offered me a contract. But, given the situation we've been in, with a cup final and our predicament in the Championship to concern us most, we decided to postpone it until the end of the season

Victory over Somerset at Trent Bridge would guarantee Notts safety - and they may still survive if neighbours Derbyshire fail 16 miles down the A52 against last year's champions Warwickshire.

All-rounder Samit Patel is also hopeful that they can once again perform on the big stage, especially if England Test players Graeme Swann and Stuart Broad are again made available by the England and Wales Cricket Board.

"We have big occasion players," he told BBC Sport. "And it was great to win for all the supporters who came down to watch us at Lord's."

As for Read's own future, the former England wicket-keeper, who had suffered a wretched season with the bat until top scoring with 53 at Lord's, is insistent that he will wait until the season is over before deciding whether to sign a new deal.

"The club have offered me a contract," he said. "But, given the situation we've been in, with a cup final and our predicament in the Championship to concern us most, we decided to postpone it until the end of the season.

"Then we'll sit down and decide what's best for the good of the club and myself."