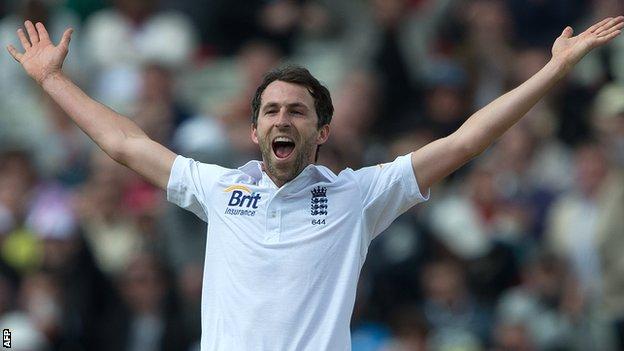 Durham seamer Graham Onions hopes his impressive county form will lead to a place in the England squad for the tour to Australia to be named on Monday.

Onions took 66 wickets at an average of 17.68 as Durham won their third County Championship title in six years.

But the 31-year-old, who has 32 Test wickets in nine matches, has not played at Test level since June last year.

Onions made a superb start to his Test career in 2009, taking five wickets on his debut against the West Indies at Lord's.

"In my squad, I'm going for Chris Tremlett, who was such a force down under two years ago, especially with his ability to reverse swing the old ball. I'm also picking Boyd Rankin as a bit of a wild card.

"Graham Onions has been the best domestic bowler all season but has fallen slightly down the pecking order after being overlooked by England all summer.

"He should be in the performance squad in Australia, ready to cover for the injuries that are inevitable on a tour of this length."

Do you agree with the rest of Alec Stewart's picks?

He also played significant roles both with the ball and as an obdurate tailender in the 2009 Ashes series win, and again in the drawn series in South Africa the following winter.

But he was injured on the tour of Bangladesh in March 2010 and a combination of damaged cartilage in his left knee and a hairline fracture of the spine, which both required surgery, kept him out of the entire 2010 domestic season and the 2010-11 Ashes tour.

The seamer was able to resume playing in March 2011 but has appeared in only one Test since, taking 4-88 in the first innings of a rain-affected drawn Test with West Indies at Edgbaston in June 2012.

Onions was on the fringes of the team for much of this summer's fixtures against Australia and New Zealand but failed to break into the XI, even when widely expected to do so at his home ground of Chester-le-Street for the penultimate Ashes Test.

Injury frustrations then resurfaced when a finger problem kept him out of contention for the final Ashes Test at The Oval last month.

"I still feel I've got a part to play and could potentially force my way into the England side," he insisted.

"I'm not going to lie and say I'm going to play another 50 Tests, but I want to play that one more game.

"I remember when I had my back injury, I just said 'I want one more game'. I've had that one, but of course you want to be greedy and play one more.

"I'm convinced that if I do get into that side then I've got a chance of staying in there, it's up to myself to stay in there."

Onions could find himself out of favour again, however, with many observers predicting the England selectors will opt for taller bowlers such as Steven Finn, Chris Tremlett or the uncapped Boyd Rankin for the firmer pitches of Australia.

Irish-born Rankin, 29, made his England one-day international debut against his native country in September and took five wickets in three innings in the recent series against Australia.

Other selection decisions surround the number six batting role after Jonny Bairstow was left out for the final Ashes Test at The Oval, having made 203 runs at an average of 29 during the series, with an overall Test average of 30 from his 12 matches.

Warwickshire all-rounder Chris Woakes was given his Test debut at The Oval and made 25 and 17 not out, taking 1-96 from 25 overs with the ball.

Others hoping for a place include Somerset's Nick Compton, 30, who scored successive centuries on the winter tour of New Zealand but was dropped after making 39 runs in four innings against the Kiwis at home in May.

James Taylor and Ravi Bopara, neither of whom have played Test cricket since last summer, and uncapped Durham all-rounder Ben Stokes, who took 5-61 and hit a rapid 27 in the final ODI against Australia, are other candidates.

Another matter to be resolved is the second spinner, with off-spinner James Tredwell, who has played only one Test against Bangladesh, expected to be chosen ahead of left-armers Monty Panesar and Lancashire's Simon Kerrigan.

England captain Alastair Cook has insisted 31-year-old Panesar, who has 164 Test wickets but played the last of his 48 matches in March, still had a future with England despite his recent personal problems which led to him leaving Sussex, while Lancashire's Kerrigan, 24, conceded 0-53 from eight overs on his debut at The Oval and did not bowl in the second innings.